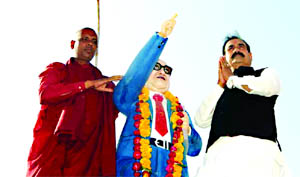 Chronicle Reporter, Bhopal Public Relations Minister Dr. Narottam Mishra today unveiled the statue of Maker of the Indian Constitution Baba Saheb Dr. Bhimrao Ambedkar at Datia district. He also dedicated the Ambedkar Park to the public. PR Minister Dr. Mishra garlanded the statue of Baba Saheb and honoured five Buddha Bhikshus (Bhantas) present during the Samaroha. Minister Dr. Mishra said that Baba Saheb’s statues have been installed at over a dozen places so far. By installing Baba Saheb’s statue, his thoughts and darshan are also popularized. He said that Madhya Pradesh is committed toward the welfare of the weaker sections. Each scheme has been introduced keeping the poor and weaker sections in mind. Veteran Social Worker B.L. Kane said that the development that has been made due to Public Relations Minister has not been made earlier. He said that water crisis has been solved in 35 villages. Medical College, various educational institutions, new roads, bridges, culverts, canals etc. are being made which is a big achievement for Datia district.