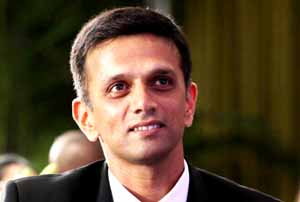 Agencies, New Delhi Former skipper Rahul Dravid, who turned 45 on Thursday, has urged the fans to come out and support the India U-19 team in the upcoming World Cup, starting on Saturday. Sharing a special message for the cricket fans in Twitter, the India Under-19 team’s head coach Dravid said, “the under-19 team is very keen to show you their talent. We know you will be watching us. We know you will be supporting the boys all the way.” Dravid has 13,288 Test runs, 10,889 ODI runs and 48 international centuries to his name.Three-time champions India, who finished runners-up in the last edition, are placed in Group B alongwith Australia, Zimbabwe and Papua New Guinea. They will kick-off their campaign on January 14 against Australia.