Dulquer Salmaan all set to make his foray into Bollywood! 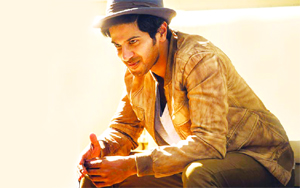 Entrepreneur and Media Founder Ronnie Screwvala will be launching heartthrob of Malayalam cinema, Dulquer Salmaan into Bollywood with RSVP’s upcoming film ‘Karwaan’. After Prabhas, who became a pan India star with Baahubali, son of South Megastar Mammootty - Dulquer Salmaan aka ‘DQ’ will make his Bollywood debut with this road trip film set against the picturesque landscape of South India. The comedy-drama directed by debutant director, Akarsh Khurana stars Irrfan Khan and digital star, Mithila Palkar as the leads. The film is a rollercoaster ride of unlikely friendships, bittersweet moments and eventually about truly finding oneself on this crazy ride called life. It revolves around the coming together of three distinct characters, from different walks of life, who are thrown together on this somewhat bizarre journey. Dulquer will essay the role of Avinash, a 30-year-old software engineer from Bangalore, whose journey kickstarts after the death of his estranged father in an accident. “Besides the sheer joy and excitement to work with the amazing Irfan Khan and Ronnie Screwvala, Karwaan became an absolute eye opener once I joined the entire team. Akarsh is a director of great clarity and with his incredible sense of humour and dry wit about everything he made sure shoot always left a smile on your face. The superb acting talents such as Mithila, Amala Ma’am, Akaash sir, Kriti, were all such a joy and inspiring to work with. Debuting in Hindi couldn’t have come through a better film or team. It’s an unforgettable shoot and there are times I wish it lasted longer. I hope the film itself becomes a grand success cause everyone on this film deserves it”, adds DQ. ‘Karwaan’ will hit theatres on the 1st of June this year and is produced by RSVP and Ishka Films. RSVP and producer Ronnie Screwvala believe in presenting content driven films and are focused on delivering films backed by power packed performances by talented actors and directors.