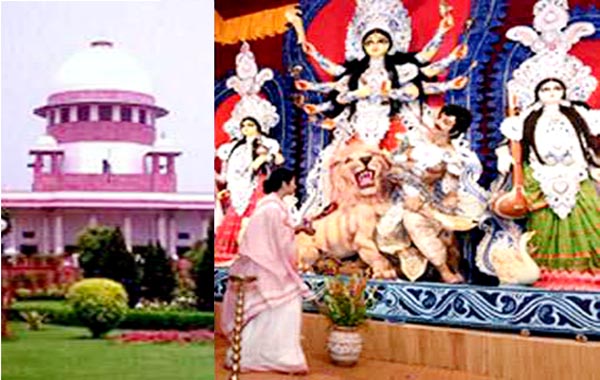 New Delhi, The Supreme Court on Friday refused to stay a West Bengal government order to give Rs 10,000 each to various Durga Puja committee for celebrations across the state. A two-judge bench, headed by Justice Madan Bhinmrao Lokur, and also comprising Justice Deepak Gupta, issued notice to the state government and sought a detailed affidavit from it within six weeks. "Let the state government file a detailed affidavit within six weeks on the issue," the division bench ruled. The petition had been filed before the apex court challenging the Mamata Banerjee government's order, which had been upheld by the Calcutta High Court, to gift Rs 10,000 to each Durga Puja celebration. Lawyer P V Dinesh had yesterday mentioned the matter before a three-judge bench, headed by Chief Justice of India Ranjan Gogoi, submitting that there is no specific guideline for spending of Rs 28 crore earmarked by Trinamool Congress government for Puja celebrations.