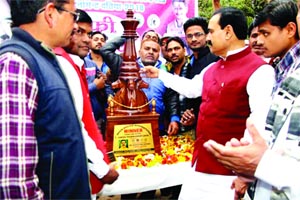 Chronicle Reporter, Bhopal Public Relations, Water Resources and Parliamentary Affairs Minister Dr Narottam Mishra today participated in programmes organised in village Hathlai and Seetapur in Datia district. Dr. Mishra said that economic conditions of the farmers have been improved because of better irrigation facilities. Focus has been made on availing more and more resources for irrigation in the interests of farmers in all regions including Datia. Dr. Mishra also appealed to farmers to take advantage by getting registration starting from February 12under Bhavantar Bhugtan Yojana. He informed that registration is being begun to provide benefit to farmers who have sown the crop of gram. Public Relations Minister informed that Rs 39 lakh 57 thousand will be provided for drought relief to 1,291 farmers in Hathlai village. Similarly, 909 farmers of village Seetapur will get a relief of Rs 52 lakh 67 thousand. Dr. Mishra appealed the farmers that farmers, who have not submitted required documents so far, should submit them to officers concerned and complete process for get relief amount. Minister Dr Mishra gave information about schemes launched for welfare of students, farmers and women in both the villages.

Public Relations Minister Dr Narottam Mishra unveiled trophy of the first Brain Master International Open Chess Tournament 2018 at Rajghat residence. Dates of the tournament and schedules will be announced soon. The Chess Federation will give Rs 2.30 lakh as a first prize in the tournament. Many public representatives were present on the occasion of unveiling of the trophy.