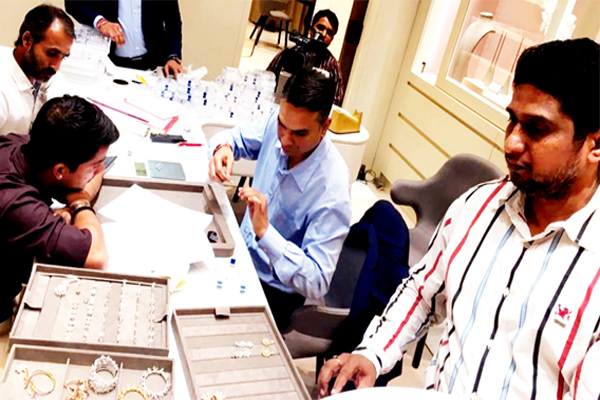 Agencies, New Delhi Enforcement Directorate (ED) on Thursday conducted search operations at 17 premises across the country of Nirav Modi and Geetanjali Gems in a case relating to alleged fraud in Punjab National Bank (PNB) and seized stocks of gold, diamonds and precious stones worth Rs 5100 crore. According to an ED statement, the probe agency searched premises linked to the billionaire diamond merchant Nirav Modi in three States, in connection with the alleged Rs.11,500-crore fraudulent transactions in the PNB. The searches were carried out at four locations in three cities Mumbai, Surat and in Delhi. It includes Neerav Modi’s office and showroom in Kala Ghodatree. The ED has initiated inquiries and booked Nirav Modi under the Prevention of Money Laundering Act (PMLA) on a complaint from the PNB.It may be recalled that Central Bureau of Investigation (CBI) had registered an FIR on January 30 against officials of the PNB, Mr Modi and his relatives, who are partners of the two diamond firms in Mumbai. It is learnt that Modi - whose operations are spread across Europe, the US, Middle East and Far East besides India - has written to PNB and other banks that he would return their outstandings. Modi, a regular feature on the lists of rich and famous Indians since 2013, was booked by the CBI, along with wife, brother and Choksi on January 31, for allegedly cheating the state-run bank to the tune of Rs 280 crore. Modi, who holds an Indian passport, left India on January 1, while his brother Nishal, a Belgian citizen, also left the country on same day. However, whether they travelled together has to be probed, they said. Modi’s wife Ami, a US citizen, left on January 6 and his uncle Choksi departed on January 4, the officials said. The latest case — which involves a sum considerably higher than the Vijay Mallya default of around Rs 9,000 crore — comes at a time when the Indian banking system is already grappling with swelling non-performing assets.