Efforts on to improve Bhavantar; Crop Survey through satellite 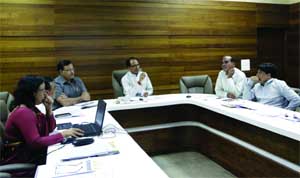 Chronicle Reporter, Bhopal Chief Minister Shivraj Singh Chouhan has said that Bhavantar Bhugtan Yojana will be made better. Manual Survey System of crop registration under Bhavantar will be changed. Efforts are being made to conduct survey work through satellite to avoid human errors. He said that farmers are being encouraged to store crops so that they are able to sell their crops at a fair price in the market. On storage of crops, the farmers will get immediate payment of 25 percent of crop value by the bank. The interest however will be paid by the government. The scheme has become popular among farmers. Farmers are demanding inclusion of other crops also. The CM was replying to queries during “Shikhar Sammelan” held by a news channel. CM Chouhan told that public supports people who work. The government has attempted to realize inclusive development in state. Several social security schemes including Re one per kg wheat, fee payment of higher education of outstanding students, free medical treatment, land to landless etc. have been implemented after dialogue with the public. Government efforts have led to bumper production in agriculture sector. The new challenge is to fetch fair price to farmers for hard work. Efforts are being made in the direction of agricultural product value promotion. An additional Rs 265 besides Rs 1735 support price per quintal wheat will be given to farmers due to drought situation. He said that apart from stern action on corruption, arrangement of laws for delivery of public service, confiscation of property, e-tendering, e-measurement an e-payment has been made to improve the system. There will be only one cadre of teachers. About 2 lakh teachers have been appointed in the last few years. Very soon recruitments will be made for 40 thousand teachers’ posts. At least 50 small and big irrigation projects are in progress in Bundelkhand. Efforts were made to fill Chandel era ponds. Dam is being planned on Kane-Betwa. Government has increased irrigated area from 7.5 lakh to 40 lakh hectare which has been done before time. Plan is to further increase it to 80 lakh hectare. He told that a bill will be brought soon to regulate fees in private schools. Youth Empowerment Mission has been made to provide new opportunities to youths. Efforts will be made to upgrade skills of 7.5 lakh youths and provide self-employment to 7.5 lakh youths. All houses in rural areas will have own toilets by October 2, 2019. Medical college has been opened in Sagar for better health services. This year seven new medical colleges will be opened. Treatment scheme up to Rs 5 lakhs will be effectively implemented in state. During a discussion, the Chief Minister informed that the bill related to death penalty to rapists of minors has been sent for approval to the President. On law and order system he said that no big listed dacoit gang exists in state, SIMI network has been busted. Naxalism has ended in borders of Balaghat. He told that Rs 2 lakh crore investment has been made during two global investor summit 2014-2016 in state. He gave details of state’s progress while telling about the situation of the state about a decade and a half ago. He said the state has surplus power. Rs 85 thousand crore will be spent on urban development. The state tops in Pradhan Mantri Gramin Sadak and Awas Yojana. Drinking water supply and power supply has been improved.