Elephant is spoiled in company of thieves 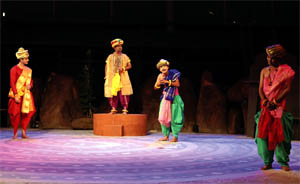 Chronicle Reporter, Bhopal A lecture on Jataka tales of Lord Buddha was organized at MP Tribal Museum under ongoing Yashodhara programme. A Play ‘Jas sangat tas rangat’ was also held at the museum. The programme began with the lecture by Dr. Radhavallabh Tripathi. Dr Tripathi said the Jataka tales concern the previous births of Gautama Buddha in both human and animal form. The future Buddha may appear as a king, an outcast, a god, an elephant—but, in whatever form, he exhibits some virtue that the tale thereby inculcates. JHe said often, Jataka tales include an extensive cast of characters who interact and get into various kinds of trouble - whereupon the Buddha character intervenes to resolve all the problems and bring about a happy ending. Dr. Tripathi further said Jatakas were originally amongst the earliest Buddhist literature. The Jatakas are the precursors to the various legendary biographies of the Buddha, which were composed at later dates. Many J?takas were written from an early period, which describe previous lives of the Buddha.