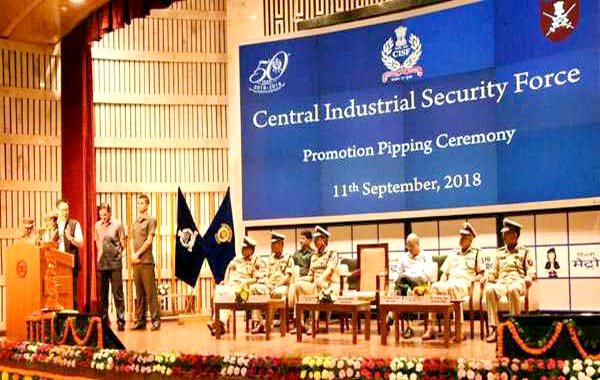 New Delhi, Minister of States for Home Affairs Kiren Rijiju on Tuesday put epaulets to the promoted personnel of the Central Industrial Security Force here. Recently CISF had carried out cadre review for promotional avenues for the force and that resulted in 3159 various ranks in non-gazetted category have been promoted in the first phase. Mr Rijiju congratulated the personnel promoted during the ceremony and other personnel who were promoted at the CISF Sector headquators. He expressed his happiness to be present on the occasion of mass promotion in CISF. He also said CISF is multi-dimensional force and has proved itself commendably in all the responsibilities entrusted to it. He praised the relief and rescue work of CISF during Kerala flood. CISF DG Rajesh Ranjan, while he congratulated all the promoted sub-officers and personnel, said that about 12000 promotions would be given in the Golden Jubilee Year in phased manner. He also said during cadre review new Cadre for Motor Transport (MT) personnel has been created for better promotion opportunities to drivers. Constable or Tradesmen would also be given promotions. Earlier promotion to Constable Tradesmen was not available. He also highlighted the good work done by CISF personnel during the Kerala deluge. “CISF is celebrating 2018-19 as its Golden Jubilee Year, it is a matter of pride that promotions to such a large number of Sub-officers and personnel are being given during the Golden Jubilee Year of CISF. This day would be remembered in the history of CISF when more than 3159 personnel were promoted in a day”, the CISF release said. On the occasion, DMRC MD Mangu Singh and high officials of the CISF were present.