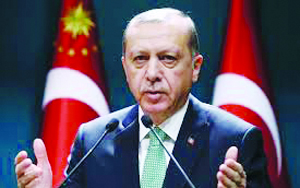 Agencies, Ankara, Turkey’s long-standing leader Recep Tayyip Erdogan has won a new five-year term after securing outright victory in the first round of a presidential poll, a BBC News report said on Monday. Election authority chief Sadi Guven said the president “received the absolute majority of all valid votes”. State media reports put Mr Erdogan on 53 per cent with 99 per cent of votes counted, and his closest rival Muharrem Ince on 31 per cent. The opposition is yet to officially concede but said it would continue its democratic fight “whatever the result”. It had earlier cast doubt on results being broadcast by state media. Final results will be announced on Friday. The polls were the most fiercely-fought in many years, and Mr Erdogan is set to assume sweeping powers under a new executive presidency. He has presided over a strong economy and built up a solid support base by investing in healthcare, education and infrastructure. But the 64-year-old has also polarised opinion, cracking down on opponents and putting some 160,000 in jail. Mr Erdogan gave a triumphant victory speech from the balcony of his party’s headquarters in the capital Ankara at 03:00 (00:00 GMT), declaring: “The winner of this election is each and every individual among my 81 million citizens.” There are reports that Republican People’s Party (CHP) presidential candidate Mr Ince has admitted defeat in a message to a journalist, though this has not been confirmed. Earlier on Sunday he accused state-run news agency Anadolu of “manipulation” over its reporting of vote-share figures. Mr Ince tweeted that he would make a statement at 12:00 (09:00 GMT) on Monday. There were another four candidates on the presidential ballot, none of whom appears to have won more than 8.4 per cent of the vote. President Erdogan will assume major new powers under Turkey’s new constitution. The changes were endorsed in a tight referendum last year by 51 per cent of voters, and are due to come into force after the election. They include: Directly appointing top public officials, including ministers and vice-presidents; the power to intervene in the country’s legal system; the power to impose a state of emergency. The job of prime minister will also be scrapped.