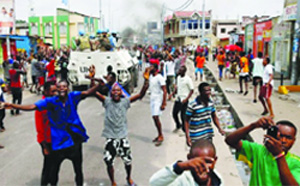 Agencies, Goma, Democratic Republic of Congo Ethnic clashes between Hema herders and Lendu farmers in northeastern Democratic Republic of Congo’s Ituri province have killed more than 40 people, local officials said on Friday, in the second such incident in a month. Tensions between the two groups have largely laid dormant since a 1998-2003 war, when thousands died in fighting between the two groups, but have flared again in recent months due to disputes over land. At least 30 people were killed in two days of clashes last month between armed Hema and Lendu.Militia activity has increased across eastern Congo’s borderlands with Uganda and Rwanda in the past year, stoked in part by President Joseph Kabila’s refusal to step down at the end of his constitutional mandate in December 2016. Alfred Ndrabu, a member of the Catholic church’s Justice and Peace Commission in Ituri, said a colleague in the village of Maze had counted 49 bodies from Thursday’s clashes, which continued into Friday morning. “The Lendu and their allies attacked the village of Maze,” Ndrabu told Reuters. “They were pushed back by security forces ... They returned with reinforcements ... which was when they perpetrated the carnage.” Jean-Bosco Lalo, an activist based in the provincial capital of Bunia, said his organisation, had so far recorded 43 deaths. He did not say who had initiated the violence. “It was a case of reprisals by the two communities,” said local army spokesman Jules Ngongo, who did not yet have a death toll. “According to our information, there were cases of people being decapitated.” Millions of people died during conflicts in Ituri and elsewhere in eastern Congo around the turn of the century, mostly from hunger and disease.Three warlords from Ituri have been tried by the International Criminal Court - and two of them convicted - for their roles in those conflicts. Another is currently on trial for war crimes and crimes against humanity.