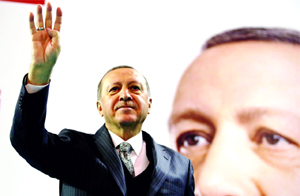 Agencies, Brussels European Union leaders are so discomfited by their relationship with Turkey these days that they relegated their summit next month to Varna, a Bulgarian Black Sea port, rather than hold it in Brussels. But despite their wariness over President Tayyip Erdogan, who has cracked down hard on critics at home and lashed out at the West, they need him too much to turn their backs. Turkish and European Union officials both expect an uneasy atmosphere at the summit on March 26. But the European hosts will have little choice but to hear Erdogan out as he asks for more money for Syrian refugees, a deeper customs union and progress in talks on letting Turks visit Europe without visas. Money is likely to be forthcoming, but little else. A senior EU official dealing with the matter said the bloc would grant Turkey a second 3 billion euros ($3.7 billion) for schools, medical care and jobs training for the Syrians it hosts. But progress on visa-free travel and customs were both a “no-go”. On the one hand, European leaders have robustly criticised Turkey for what they see as rapid backsliding on democracy and human rights, especially during a crackdown in the wake of a failed coup in 2016. Some of Erdogan’s hostile rhetoric towards Europe last year, including comparing the Dutch and German governments to Nazis, has been, for EU leaders, beyond the pale. But on the other hand, European countries still rely on Turkey as a NATO ally on Europe’s southern flank. And an EU deal with Erdogan that halted the mass influx of Syrian refugees into the bloc means the Turkish leader is like an estranged relative that you can’t disinvite from a family dinner, no matter how badly you think he has behaved.