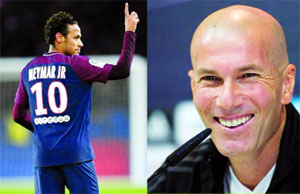 Agencies, Madrid Real Madrid coach Zinedine Zidane stated his admiration for Paris St Germain forward Neymar on Saturday amid continuing reports in the Spanish media over a future bid to take the Brazilian to the Bernabeu. Asked about Neymar at a news conference ahead of Real’s Liga home game with Deportivo La Coruna on Sunday, Zidane said: “I don’t talk about players that aren’t mine, but having said that, and this is very important, he’s a player that everyone on planet football loves because he is a great player.” PSG, who face Real in the last 16 of the Champions League, plucked Neymar from Barcelona last August for a world record 222 million euros ($271.28 million)although despite his impressive displays on the pitch he has cut an unhappy figure at times. Neymar scored four goals in the 8-0 thrashing of Dijon on Wednesday but was booed by the PSG fans for not allowing team mate Edinson Cavani to take a penalty which would have made the Uruguayan the club’s record scorer ahead of Zlatan Ibrahimovic. Real tried to sign Neymar when he was at Santos but were pipped to his signature by Barca and last month the club’s president Florentino Perez made a thinly veiled appeal to the Brazilian to join the 12-times European champions. “Being in Madrid would make it easier to win the Ballon d’Or,” Perez said in an interview on Spanish radio.“Madrid is a club that gives a big player everything they need to do so. Everyone knows I wanted to sign him.” Real have lost two and drawn one of their last three league games and fallen 19 points behind runaway leaders Barcelona.Sunday’s game against Deportivo, who are in the relegation zone, offers the floundering European and Liga champions a chance of temporary relief from their crisis. Zidane said his ‘BBC’ strike force of Gareth Bale, Cristiano Ronaldo and Karim Benzema were fit to play, though he did not reveal if he would field the trio, who have not started a game together since facing Barcelona in April last year. “It’s great news, it’s always good to be able count on players of such quality and get your injured players back and I’m happy to have them back as they give us more power in attack,” Zidane added.