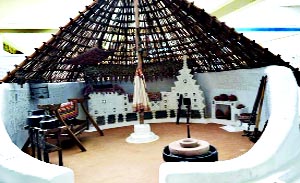 Chronicle Reporter, Bhopal An exhibition ‘Sikkim and the Sikkimese: The Sentinels of the Godly Mountains’ has become popular among visitors at the Indira Gandhi Rashtriya Manav Sangrahalaya (IGRMS). Once a tiny little kingdom in the Himalayas, Sikkim became an integral part of the Indian Nation and attained the 22nd State of India in May 16, 1975. The people of Sikkim, Lepcha, Bhutia and the Nepalese together constitute Sikkimese population who are privileged to have their unique socio-cultural, political and historical presence of the ancient past. They regard the mountain Kanchendzonga as their guardian deity whose benevolence can protect them from the miseries and roars can crumble them from the very existence. The present exhibition envisages to present the glory of mountain and its people who stand sentinel to protect the amity of the great Himalayas through their exquisite art and aesthetic traditions of Monastic cultures, mountain livelihood patterns, animistic beliefs and practices, that are profoundly reflected from the ethnographic objects collected by the Indira Gandhi Rashtriya Manav Sangrahalaya over a long period of its existence. This exhibition has been created by Arun Kiro (Assistant Curator) with the help of museum officials.