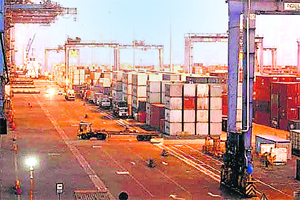 Agencies, New Delhi, Exports from the special economic zones (SEZs) of the country registered a growth of 38 pc in May 2018, a statement said. The monthly exports data released by Export Promotion Council for SEZ and Export Oriented Unit (EPCES) shows merchandise exports from SEZs touched Rs 29,236 cr in the month of May this year as against Rs 21,220 cr in the same month last year. According to the EPCES report, the major sectors contributing to the outstanding growth numbers in the month were biotech, chemicals, pharmaceuticals, computer, electronics, non-conventional energy, plastic, rubber, trading and services. Among the high-growth sectors of SEZs, chemicals and pharmaceuticals exports stood at Rs 16,848 cr in May 2018, an increase of 55per cent from last year. Electronics exports from the SEZs surged by 218 per cent to Rs 6 cr and Biotech sector exports rose by 36per cent to Rs 370 cr between May 2017 and May 2018.Non-conventional energy also witnessed a record growth of 521per cent, with exports touching Rs 42 cr in May 2018 as Rs 7 cr worth of exports in May 2017. Cochin SEZ in Kerala maintained its stellar performance with exports from the SEZ increasing by a whopping 720per cent to touch Rs. 5,516 cr as against Rs 673 cr in 2017. Exports from Falta SEZ also grew by a healthy 116 per cent to touch Rs 1,228 cr in May 2018 against exports of Rs 568 cr in May 2017. Other SEZs to observe a positive year-on-year growth for the period are Indore and MEPZ, with exports increasing by 32per cent and 29per cent respectively. The combined export for merchandise and software from SEZs during April-May 2018 increased by 11per cent to touch Rs 1,01,238 cr as against Rs 91,584 cr during the same period last year. Cochin, Falta and Noida were the top-growing SEZs for combined exports of merchandise and software during the one-month period of April-May 2018.