Exposed: Who is this new man in Alia’s life? 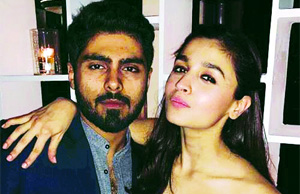 Soon after the release of SOTY in 2012 love started blossoming between our very own bubbly beauty Alia Bhatt and handsome hunk Sid. But then came the reports about the split of the couple and now we think both these young lovers have separated officially. And we are saying so because in past few months, Alia has often been spotted partying with her ex Ali Dadarkar and this is fueling her breakup rumors. Even yesterday, at her friend Kripa Mehta’s wedding function the bubbly beauty was seen bonding with Ali. Not only this Alia also shared a picture with him on her Insta story with caption, ‘’#BFFGOALS @ali_dadarkar.’’ This is not the first time, Alia was spotted with Ali. The actress recently spent New Year’s Eve in Bali and soon after her return she attended Ali’s birthday party. She hanged out with group of common friends. Also, in September last year, Alia shared a picture of herself chilling with bestie Akansha Ranjan and Ali Dadarkar. Not just this, Sidharth even refused to work with Alia in an advertisement of popular aerated drink. As per a report in Spotboye.com, when the team approached Sidharth, he clearly said that he is not interested to work with the same co-actor again