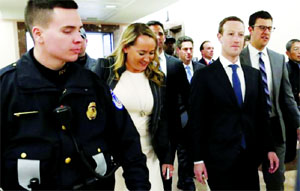 Agencies, Washington Facebook Chief Executive Mark Zuckerberg’s No. 1 mission during his appearance before U.S. lawmakers on Tuesday and Wednesday will be to defend against calls to regulate internet-based companies. The prospect of new laws that restrict Facebook and other internet companies, however, is extremely unlikely not only because of a lack of political will and the effective lobbying of technology companies but because few lawmakers want to grapple with the sheer complexity of the technical issues involved. Zuckerberg is scheduled to testify before a joint hearing of the Senate Commerce and Judiciary Committees. He is confronting combined outrage over how Russia used Facebook to spread divisive political propaganda during the 2016 U.S. presidential election and how Facebook seemed unaware that a political consultancy, Cambridge Analytica,improperly harvested personal data of about 87 million Facebook users, most of them Americans. Senator Bill Nelson, the top Democrat on the Senate Commerce Committee, said on Monday that while he believed new regulation was needed in the face of Facebook’s twin scandals, he did not expect anything substantive to happen. He attributed that in part to the format for Tuesday’s joint hearing before the Senate’s Commerce and Judiciary committees that will give Zuckerberg an advantage, saying it would favor spectacle over thoughtful dialogue. “How in the world can you have 44 senators do a hearing that has a lot of substance when each senator only has four minutes?” Nelson asked reporters on Monday.