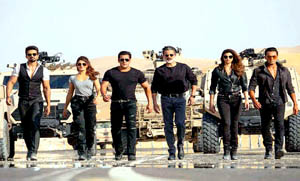 New Delhi, After treating the audience for two films, the title track 'Allah Duhai Hai' marks its return to the 'Race' franchise with the third installment. The song showcases the family turned enemies grooving to the 'Race' anthem with a unique twist. The team of 'Race 3' recently unveiled the teaser of the title track creating excitement amongst the audience to witness the rehashed version of the chartbuster. Featuring the entire star cast, 'Allah Duhaai Hai' has always been the highlight of the film. Taking the franchise forward, the Salman Khan starrer yet again reprises the title track with 'Allah Duhai Hai' with the ensemble cast. Salman Khan, Jacqueline Fernandez, Anil Kapoor, Bobby Deol, Daisy Shah and Saqib Saleem are seen shaking their legs at the foot-tapping tunes of Vishal Mishra's track. Composed by Vishal Mishra, Jam8, and Meet Bros, 'Allah Duhai Hai' is crooned by Sriram Chandra, Jonita Gandhi, and Amit Mishra. Known for its glamorous portrayal, 'Allah Duhai Hai' has been the most eye-catching song of the Race franchise. Set in a masquerade party setting, the party track showcases the entire cast. With 'Race 3', the song once again features the star cast of the action thriller at their stylish best as they groove to the catchy tunes. 'Race 3' takes the 'Race' franchise to an all-time high with action a notch higher and suspense that will leave you at the edge of your seats. With the action sequences being shot extensively in Thailand, Abu Dhabi and Mumbai, it is set to break the box office records. Marking the festive season of Eid, 'Race 3' proves to be a complete festive bonanza, with action, family drama, suspense, romance and promise of blockbuster songs. Starring an ensemble cast of Salman Khan, Jacqueline Fernandez, Anil Kapoor, Bobby Deol, Saqib Saleem and Daisy Shah, the action thriller is undoubtedly one of the most awaited films. Produced by Salman Khan Films and Ramesh Taurani under the banner of Tips Films, 'Race 3' is directed by Remo D'souza and will hit theatres on June 15.