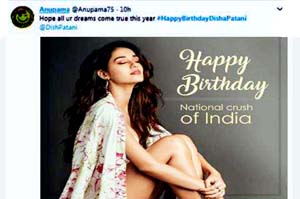 New Delhi, Disha Patani is one of the youngest Bollywood actors to gain recognition in a quantum of masses that make for a pivotal part of Indian viewership. On account of Disha's birthday, fans across the nation took to Twitter wishing the gorgeous actor a 'happy birthday' touting her to be the National Crush of India. A strong India trend #HappyBirthdayDishaPatani was witnessed on Twitter wherein netizens had poured in all their wishes declaring Disha the national crush. Disha's career graph has been one of the sharpest upward trends in Bollywood since the last two years. The actress first made inroads into the audience with a popular chocolate commercial on the small screen. The advertisement was much loved with the masses adoring Disha, the frequency of the telecast increased owing to the audience response Disha bagged her first Bollywood role with renowned filmmaker Neeraj Pandey in MS Dhoni: an untold story.The actress played a pivotal role that struck emotional chords with the masses. The film went on to collect and emerged as one of the highest grossers of the year. Once again garnering Disha love from across quarters. Her last outing, 'Baaghi 2' stands as second highest grosser of 2018 by minting Rs 160 crore at the ticket counters. With her vulnerability, Disha once again won over her viewers. Just two films old, Disha Patani is up and running a high race with a slew of projects lined up cashing in on her demand and popularity amidst the masses. Soon after 'Baaghi 2' released to a record-shattering response Rs 160 crore mounted with Disha being the face of the film. Recently, the actress is making headlines for having bagged a role alongside the stellar star cast of Salman Khan and Priyanka Chopra in 2019 Eid release, 'Bharat'. Be it the small screen or the big screen or on social media, Disha has been reigning in hearts of the audience and is all ready to treat the masses with her upcoming films.