Farmers’ crops will not be sold at low prices: CM 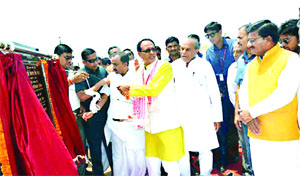 Chronicle Reporter, Bhopal Chief Minister Shivraj Singh Chouhan said that farmers’ crops will not be sold at low prices. Farmers will get fair price for their produce. If the prices of farmers’ crops are low in the market, then the government will compensate them. Whether it is a matter of natural calamity or any other reason the state government will always stand with the farmers. Chief Minister Shivraj Singh Chouhan was addressing the Kisan Sammelan at Waraseoni tehsil headquarters in Balaghat district. Chouhan transferred the amount of Rs 57 crores online in the bank accounts of 72 thousand farmers of Balaghat district under Mukhya Mantri worth Rs. 419 crores. CM Chouhan said that the state government has always taken decisions in favour of farmers. He said that 15 years back, farmers of the state used to get agriculture loan at 18 percent interest for agricultural work. Now agriculture loan is being made available to farmers at lesser than zero percent interest rate. Chouhan said that earlier no one could even imagine that Rs 57 crores could be distributed as incentive to farmers but the state government did so. He said that Rs 1700 crore is being distributed as incentive amount to those farmers who have sold wheat and paddy on minimum support price last year. This year farmers who sell their wheat on Minimum Support Price will be given Rs 265 per quintal incentive. Discussing the Mukhya Mantri Krishak Rin Samadhan Yojana, CM Chouhan said that the state has also prepared a scheme for those farmers whose loans have expired and who were not being able to avail the benefit of zero percent interest. Loan interest of such farmers has been waived. Such farmers will have to deposit half the amount of principle amount. The remaining half amount will be merged with the loan taken on zero percent interest. On the losses incurred by farmers due to natural calamity in Balaghat district, he said that the state government has approved a relief amount of Rs 12 crore. This amount has been deposited in the accounts of the farmers. He said that the state government has decided to increase the financial assistance amount from Rs 15 thousand to Rs 30 thousand per hectare if more than 50 percent loss of crops is incurred due to natural calamity and such farmers will also be given benefit of crop insurance scheme. CM Chouhan said that the state government has increased the remuneration of tendu patta labourers from Rs 1250 per standard bag to Rs 2,000 per standard bag. Purchase of Mahua flower on Minimum Support Price has been arranged. Scheme has been made for the welfare of male and female tendu patta pluckers in which male pluckers will be provided shoes (charan paduka) and water bottles and women will be provided slippers, water bottles and saris. On the scheme for unorganized sector labourers Chouhan said that the state government has developed a scheme for the welfare of labourers working in 36 different categories. Now the farmers with 2.5 acres of land for cultivation will be included in the category of unorganized sector labourers. The Chief Minister said that a five-member committee will be formed at gram panchayat level to check irregularities of any kind in the schemes of unorganized sector labourers. This committee will decide that only the eligible person will get the benefit of the scheme. Talking about the unemployed youths he said that the state government is going to open one lakh jobs next month. These jobs will have reservations for women. Women will also be given reservation in police recruitments. Chouhan told that the state government has decided to put an end to the contractual system.