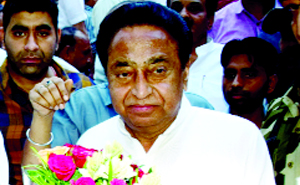 Chronicle Reporter, Bhopal State Congress president Kamal Nath has accused the state government of overlooking the interests of the peasants. He said the farmers are facing grave hardships due to irregularities in Krishi Upaj Mandis. Nath said farmers reaching mandis and procurement centres to sell wheat, gram, masoor, mustard, onion and garlic are facing lot of problems. Due to irregularities, farmers have to wait for hours. They have to wait for 3-4 days to sell their crop. Kamal Nath said due to mismanagement in mandis, one farmer Moolchand died at Vidisha’s Lateri Mandi, while another farmer Omprakash Patidar died at Rajgarh district’s Narsinghgarh Mandi while waiting to sell their crop. But the Shivraj government is unconcerned. Not bothered about the plight of farmers, the government is busy in yatras and making announcements. Nath alleged there is rampant corruption in the weighing and purchase of crop.