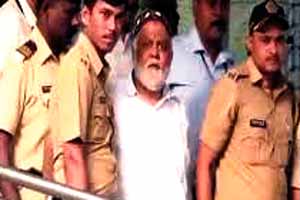 Agencies, Mumbai A designated Terrorist and Disruptive Activities(Prevention) Act (TADA) court here remanded a 1993 Mumbai serial bomb blasts accused and close aide of fugitive underworld don Dawood Ibrahim, Farooq Ahmed alias Farooq Takla, who was arrested after being deported from Dubai on Thursday, into the CBI custody till March 19. Takla was arrested from the international airport here by CBI and was produced in the court late this evening amidst heavy police security by the officers of CBI, who are investigating the 1993 bomb blasts case.TADA Judge asked him about any ill treatment at the hands of CBI, to which the accused replied in negative. Takla had fled the country soon after 1993 serial blasts and a red- corner notice was issued against him in 1995. He was also declared as proclaimed offender. While moving the remand application, CBI told the court that accused was deeply involved not only in the conspiracy but also at various stages of the blasts and hence a detailed custodial interrogation of the accused was necessary, following which the court granted CBI custody. According to CBI, Takla frequently travelled between Dubai and Karachi, also, he was in touch with Pakistani intelligence agency ISI. According to investigation agency, the Dawood aide was providing logistical support to gang members arriving in Pakistan for meetings. Takla had also developed deep contacts in the United Arab Emirates (UAE) and was providing similar logistical support in the Emirates to the gang members on the instructions of Dawood Ibrahim. He is believed to be in the know about various illegal businesses of Dawood Ibrahim. Before he was produced in the court, he was taken to the government- run hospital for a medical examination, which stated that he was medically fit. Earlier, 100 accused persons including prime accused Yakoob Memon and others were convicted and sentenced for their involvement in the 1993 serial blasts in the first leg of the trial, while in the second leg of trial, six others including gangster Abu Salem were convicted. The 1993 Mumbai serial bomb blasts were one of the most destructive and coordinated blasts in India, which occurred at 12 different places in the metropolis within a span of a few hours that killed 257 people and left 713 injured besides destroying properties worth Rs 27 crore.