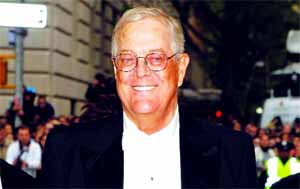 Agencies, Indian Wells The conservative Koch network spent its annual donor conference celebrating policy victories under President Donald Trump such as the tax overhaul, but the elation was tinged with anxiety over November’s congressional elections that could pose a risk to its agenda. To that end, the network plans to spend what would be unprecedented sums for the Kochs to maintain Republican majorities in the US Senate and House of Representatives, while trying to sell voters on the benefits of the newly passed tax package, according to network officials who briefed reporters on their strategy during the conference this weekend in Indian Wells, California. Historically, the party in power loses seats in congressional elections after a new president’s election. This year, Republican angst is compounded by Trump, whose tumultuous presidency helped galvanize Democratic and independent voters to go to the polls in special and state elections last year. “It’s going to be a very challenging environment,” said Tim Phillips, president of Americans for Prosperity, a grassroots political group that is part of the Koch network. “The left is energized. There’s no question about that.” The network is prepared to spend up to $400 million on the congressional races - a 60 percent increase from its investment in the 2016 election, officials said. Energy magnates Charles and David Koch have long been outsized players in Republican politics, but they never warmed to Trump during the 2016 campaign. With Trump in the White House, however, they have seen several policy goals realized, including the tax legislation and cutting federal regulations.But the Koch network still diverges from the Republican president on issues such as immigration and trade. The Kochs strongly support legislation that would protect “Dreamers” - people brought illegally to the United States as children - from deportation. Two Koch operatives, Daniel Garza and Jorge Lima, were at the White House on Friday to try to help broker a deal with Congress over the Dreamers. The network issued a statement on Friday disagreeing with a proposal in Trump’s immigration blueprint that would set new limits on legal immigration. On trade, Phillips and other Koch operatives are deeply concerned about the administration’s moves to impose tariffs on some imports and ardently support the North American Free Trade Agreement with Canada and Mexico, which is being renegotiated and that Trump has threatened to abandon.