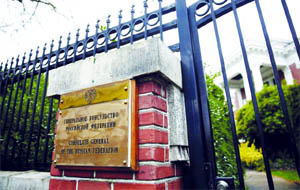 Agencies, Washington The U.S. decision to expel 60 alleged spies is unlikely to cripple Russian spying in the United States because others have wormed and hacked their way into American companies, schools, and even the government, current and former U.S. officials said. Moscow’s spy services still use the cover of embassies and consulates, as Washington does. But they also recruit Russian emigres, establish front companies, dispatch short-term travelers to the United States, recruit Americans, and penetrate computer networks, the officials said. “Russia used to have one way of doing things. Now, Putin is - let a thousand flowers bloom,” a former senior U.S. official said in a recent interview, describing Moscow’s move to a more multifaceted approach under President Vladimir Putin, a former Soviet spy himself. The FBI follows the movements and monitors the communications of suspected foreign spies, but the increased Russian presence and the advent of commercially available encrypted communications are an added challenge to the FBI’s counter-espionage force, said the officials, some of whom spoke on condition of anonymity to discuss the sensitive topic. As one U.S. official put it when asked if Russian spying is a harder target: “It’s more complex now. The complexity comes in the techniques that can be used.” While the CIA tracks foreign spies overseas and the National Security Agency monitors international communications, the FBI is responsible for spy-catching inside the United States. The White House on Monday said it would expel 60 Russian diplomats, 12 of them at the U.N. mission, and close the Russian consulate in Seattle as part of a multi-nation response to the Kremlin’s alleged nerve agent attack on a former Russian spy in Britain. Briefing reporters, a senior U.S. official said there were “well over” 100 Russian spies posing as diplomats in the United States before the expulsion order. A veteran U.S. official charged with keeping tabs on Russian espionage said the administration downplayed the number of suspected Russian spies working under diplomatic cover to avoid giving the Russians a clearer picture of how many people are under surveillance. The actual number varies over time, but “it averages more like 150 or so,” the official said. “We’ve got a very, very, very good counter-intelligence apparatus,” said Robert Litt, a former general counsel for the U.S. Director of National Intelligence. “There are a lot of people in the FBI whose job it is to track these people - and they’re very good at it.”