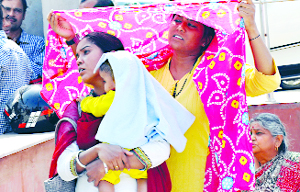 Mercury crosses mark of 44 degrees mark in capital; temp above 46 degrees at many places

Chronicle Reporter, Bhopal There is a day left to Nautapa but fierce hot weather conditions were felt in the State capital on Wednesday as the day temperature crossed the mark of 44 degree Celsius, making Wednesday the hottest day of the season. Bhopal as well as many other places in the state experienced the heat wave as the mercury level crossed 46 degrees Celsius at some places. The weatherman has issued a warning of heat wave in Bhopal over the next two days as well and temperatures could soar to 45 degrees Celsius. Hot winds from the west, a clear sky and scarcity of moisture in the air are helping the mercury shoot up. It could touch 45 degrees by the weekend. Harsh sun and hot winds turned the City of Lakes into an oven on Wednesday making it the hottest day of the season. What made it worse is that the scorcher of a morning came after a sweaty, uncomfortable night, one of the hottest of the season. And all this just 24 hours before the traditional onset of Nautapa — nine days of blistering heat. Weather Department has already warned that there will be no let-up in the heat in central and western India till May 27 (Nautapa begins on May 25). The heat wave conditions are likely to persist in northwest and central India till Sunday, according to an IMD forecast. State capital witnessed highest day temperature of the season at 44.4 degree Celsius on Wednesday while the night temperature continued to trouble at 31.2 degree Celsius. Providing no respite in the hot weather conditions day temperature in the state capital continued to soar high. Five places recorded day temperature around 46 degree Celsius on Wednesday. Gwalior, Rajgarh and Khajuraho recorded day temperature at 46 degree Celsius. Sheopur and Nowgong recorded day temperature at 46.6 and 46.7 degree Celsius on Wednesday. Heat wave warning has been issued for Gwalior, Chambal, Umaria, Chhatarpur, Tikamgarh, Damoh, Raisen, Rajgarh, Khandwa, Khargone, Dhar, Barwani, Burhanpur, Shajapur, Ratlam, Rewa and Satna. There would be warm nights at Sheopurkalan, Tikamgarh, Hoshangabad, Bhopal and Guna, met officials added. There is a possibility of thundery development at Jabalpur, Betul, Hoshangabad, Sagar, Damoh, Chhatarpur, Neemuch, Mandsaur, Aagar, Ratlam, Jhabua and Alirajpur. According to the forecast thundery activities and light showers are likely to be witnessed in Jabalpur division and Betul, Hoshangabad, Sagar, Damoh, Chattarpur, Neemuch, Mandsaur, Agar, Ratlam, Jhabua and Alirajpur districts. According to the Met official systems are active which have made the weather conditions harsher. A trough over south Tamil Nadu to east Madhya Pradesh inducing a upper air cyclonic circulation over north central Maharashtra and south Madhya Pradesh and a trough from east Rajasthan to Gangetic West Bengal and north Madhya Pradesh- Jharkhand are active and induced the prevailing weather conditions.