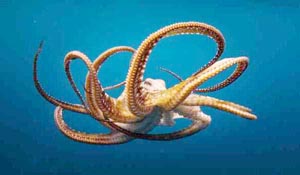 Tokyo, An octopus, who correctly predicted all of Japan's World Cup results, has been killed and turned into sashimi, a BBC News report said.The mollusc, named Rabio, was hailed as psychic after an experiment in a paddling pool.But Kimio Abe, the fisherman who caught Rabio, felt he'd make more money selling it for food than from its clairvoyance. Local media in Japan reports Kimio decided his livelihood was more important than viral fame.Rabio - a giant Pacific octopus - predicted Japan's win against Colombia and their draw with Senegal by moving to different parts of a paddling pool.Each sector - marked as win, lose or draw - had food placed to tempt the octopus.Japan looked like they were heading for the quarter finals, stunning Belgium with two goals in a four minute period. But they left heartbroken with Belgium scoring the winner with pretty much the last kick of the match.While Japan's footballers are left to dwell on what might have been, at least they still have their health. Unlike Rabio. But his spirit will live on, as the fisherman plans to use another octopus to predict the results of future fixtures.Rabio was sent to market before Japan lost 1-0 to Poland on 28 June.He had, of course, predicted the loss - but not his own demise. Rabio wasn't the first psychic octopus with an interest in international football competitions. In 2010, a German invertebrate named Paul correctly predicted six World Cup games. Paul passed peacefully in his aquarium at the Sea Life Centre in Oberhausen in 2012, aged two.