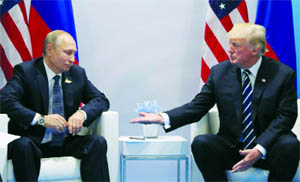 Agencies, Washington/Moscow, U.S. President Donald Trump and Russian President Vladimir Putin will meet for their first summit on July 16 in Helsinki, a venue famed for its Cold War diplomacy. The Kremlin and the White House simultaneously announced the place and date a day after reaching agreement for the two leaders to meet following a visit to Moscow by U.S. national security adviser John Bolton. Trump will meet Putin after attending a July 11-12 summit of NATO leaders and a visit to Britain. The date will give Putin a chance to attend the July 15 closing ceremony of the soccer World Cup hosted by Russia. The two leaders have met twice before on the sidelines of international gatherings and spoken at least eight times by phone. They have also made positive comments about each other now and then with Putin lauding Trump’s handling of the U.S. economy. The summit could irritate U.S. allies, such as Britain, who want to isolate Putin, or countries such as Ukraine who are nervous about what they see as Trump’s overly friendly attitude towards the Russian leader. It is also likely to go down badly among critics who question Trump’s commitment to the NATO alliance and who have been concerned about his frictions with longtime allies such as Canada and Germany over trade policy. “The president is pursuing this meeting in the interest of national security and to determine whether Russia is willing to make progress in our relationship,” White House spokeswoman Lindsay Walters told reporters aboard Air Force One, adding that Trump hoped it would “help reduce tension.” Relations between Washington and Moscow became the most strained since the end of the Cold War during the administration of President Barack Obama who imposed sanctions for Russia’s annexation of Crimea from Ukraine.U.S. intelligence agencies accused Russia of interfering in the 2016 U.S. election, an allegation Moscow has repeatedly denied. The summit is also boost for Finland, whose capital hosted major Cold War summits between leaders such as Leonid Brezhnev and Gerald Ford in 1975, and Mikhail Gorbachev and George H.W. Bush in 1990, as well as a meeting between Boris Yeltsin and Bill Clinton in 1997. Moscow hopes the Helsinki summit will restart a dialogue between Washington and Moscow, said Vassily Nebenzia, the Russian ambassador to the United Nations. “We need each other, not because we want to love each other. We don’t want and we don’t need to be loved. We simply need to hold normal, pragmatic relations with a major country upon which - like what lies upon us - a lot in the world depends,” Nebenzia told a news conference at the United Nations.