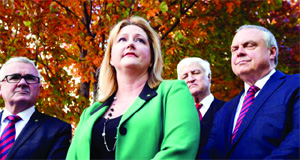 Agencies, Sydney, Australia faces a series of by-elections after the High Court ruled on Wednesday an 11th lawmaker must leave parliament in a test-case decision that prompted four more lawmakers to quit amid a widening citizenship crisis. The court found unanimously that opposition Labor Party Senator Katy Gallagher was a British citizen at the time of her election, despite her attempts to renounce it, and so ineligible to be elected to the federal parliament. Dual citizens are blocked from national elected office under Australia’s 117-year-old constitution. The decision prompted four other lawmakers in similar predicaments to Gallagher to resign, triggering by-elections for their lower-house seats. Gallagher and the other four are not members of Australia’s ruling centre-right coalition, keeping its slender majority safe, but the resulting polls will be a litmus test of the public mood and Prime Minister Malcolm Turnbull’s popularity ahead of a general election due next year. “By-elections are notoriously difficult things,” Nick Economou, a political scientist at Monash University in Melbourne, told Reuters. He said the Queensland state seat of Longman, held by Labor’s Susan Lamb on a knife-edge margin until her resignation on Wednesday, was a bellwether contest.“If Labor was to lose that, it’d be a huge fillip for Turnbull,” Economou said. “On the other hand, if Labor was to win with an increased majority, that would be a sign that there’s a problem for the government,” he said.