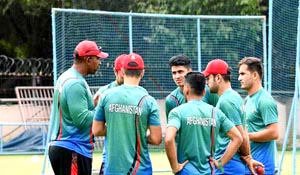 Bengaluru, Afghanistan will write another chapter in their remarkable cricket history when they take the field at the M Chinnaswamy Stadium here on Thursday for their maiden Test against India. They come into the match as underdogs, as one must be on their Test debut – that too against the No.1 team in the world – but definitely not as unknowns, for they have in their side some genuine superstars of the game. Five Afghan players who have in recent times been at the forefront of their wins and are their country's ambassadors around the sporting world. They embody the team's passionate, carefree yet highly competitive attitude to the game, an ICC report on Tuesday said. Afghanistan captain Asghar Stanikzaihas been the pillar of the team. When he fell ill at the start of the ICC Cricket World Cup Qualifier 2018 in Zimbabwe, the team struggled for balance. Not surprisingly, their revival in the tournament coincided with his return and he was around to collect the winners' trophy. Stanikzai was central to the team's latest ICC Intercontinental Cup campaign as well.He made 624 runs in seven matches at an average of 78, including four hundreds – more than any player. He also struck 21 sixes in that tournament, nearly double that of anyone else. In their final game at Greater Noida against Ireland, where they won by an innings and 172 runs, he was Player of the Match with his 145.The No.1 bowler Rashid Khan on the MRF Tyres ICC T20I rankings has played just four first-class matches, but comes into the Test with a reputation as the best limited-overs spinner in the world. If Afghanistan are no longer automatically the underdogs in any match they play, much of that is down to the Rashid threat. The star leg-spinner Rashid has a googly that's hard to pick or read from his hand.He's quick with his arm action and in the air and has been smart with his variations in limited-overs cricket. But 23 wickets in three I-Cup matches, taking a five-wicket haul every time, shows he's no mug with the red ball either. He's promised to be patient with his bowling in the Test, and the world can't wait to see how he fares.If Stanikzai can claim his spinners are better than India's, one of the reasons is Mujeeb Ur Rahman. The 17-year-old spinner has impressed many with his control. A bowler with considerable mystery to his art and capable of getting the ball to turn both ways, he has only built on his success in the ICC Under-19 World Cup 2018.He can count the likes of Chris Gayle and Virat Kohli as victims this year too. During the ICC Cricket World Cup Qualifier 2018 that followed in Zimbabwe, he became the youngest player to claim a five-wicket haul in ODIs and stood out for his economical bowling in the recent Indian Premier League. He promises to be another exciting prospect with the red ball. The No.3 all-rounder in ODIs and No.2 in T20Is, Mohammad Nabi brings a degree of experience and stability to the Afghanistan line-up. He has been a crucial part of the set-up since their Division 5 days with his batting as well as off-spin. In the middle-order, he is a calming influence when the team has a tendency to be  mercurial. Before the arrival of Khan, he was Afghanistan's best travelled player, having experience in Bangladesh and Pakistan, and with a stint with MCC in England. His 86 first-class wickets including three five-wicket hauls, and 1934 runs from 32 matches should carry considerable weight. The wicket-keeper batsman Mohammad Shahzad is perhaps Afghanistan's original rockstar. Right from his debut back in 2009, he's been a one-of-a-kind entertainer. He loves the fours and the sixes, the outrageous shots that get him those runs, and the applause that comes with them. Yet, he's never been all about style and no substance. Shahzad is a big-match player,guiding his team's campaigns in global events – and he lives for the grand stage. Given his T20 exploits at the top of the order, that's been considered his best format.But, don't be fooled; his first-class numbers are more than impressive: 1582 runs from 20 matches, at an average of 54.55. That includes a high score of 214 not out, made while chasing 494 in a 2010 I-Cup match against Canada for a memorable win. Expect him to bring more than his famous celebrations to his Test debut. Zahir Khan, the young left-arm wrist spinner, who had 31 wickets from six matches in the I Cup, with a bowling average of 11.74. When at the ICC Under-19 World Cup 2018,he found out he had an IPL deal with Rajasthan Royals. An injury spoilt his chances,but it's just a matter of time.