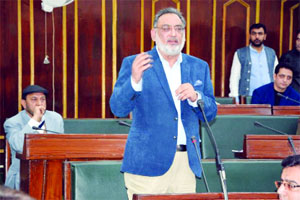 Agencies, Jammu Jammu and Kashmir Finance Minister, Dr Haseeb A Drabu on Tuesday announced an exclusive Industrial Development Scheme for J&K bringing, for the first time, the services sector under the ambit of the pioneering initiative. Making the announcement in the State Assembly on Tuesday evening while winding up the discussion on Budget 2018-19 in the House, Dr Drabu said that under the scheme, to be rolled out shortly, Central Capital Investment subsidy of 30 percent would be provided for plant and machinery including buildings for hotels. He said it is for the first time that such benefits are extended to the services sector. He also announced 3 percent interest subsidy for five years and 100 percent insurance subsidy under the scheme. “All new industrial units in manufacturing and services sector operational in the state will be eligible for various benefits under this scheme”, Dr Drabu said and added that the scheme will have two key components: 100 percent insurance cover and considering buildings of the hotels as plant machinery thus enabling them to 30 percent capita subsidy. “This will be the first post-GST scheme that will take care of the new realities in public finances,” he said.The Finance Minister made several other important announcements to supplement the social security initiatives announced by him in the Budget 2018-19. To bring more beneficiaries under the ambit of various social security schemes, Dr Drabu said that additional funds to the tune of Rs 15 crore each shall be added to the existing corpus for Old Age and Widow Pension. He also announced that the widowed daughters of the government employees will also be eligible for pension as earlier announced for their married daughters.Dr Drabu also proposed merger of Marriage Assistance and various other scholarship schemes to make these more comprehensive and productive. He said that the government will come up with a comprehensive and consolidated scheme for which the additional incentive shall be added with Aadhar linkage to avoid a possible duplication. He also announced provision of Rs 5 crore for interest subvention for business start-up ventures by SC/ST entrepreneurs.The Finance Minister said that the state government in the last three years has been putting in financial resources for generation of employment in the state. He also proposed to revisit the Fixed Travel Allowance (FTA) provided to engineers working in the government departments to make it rational saying that currently FTA for these employees is a meagre Rs 30 per month. The Finance Minister further announced increase in the refreshment of the government employees during assembly session for overtime work. He said it would be enhanced from the existing limit of Rs 7500 to Rs 10000. For Ladakh region, Dr Drabu announced a special duty allowance for employees on same lines and pattern as Union Government i.e, 10 percent of basic pay. This will apply to all who work in the region, he added.He also said that the existing compensatory allowance and border allowance will be streamlined for the employees posted at hard stations in the state besides, announcing inclusion of more hard areas in the said list. With regard to the initiatives for the legislators, the Finance Minister announced the medical allowance to the former legislators at par with the sitting MLAs, increase in car loan from Rs 5 lakh to Rs 10 lakh and also gives leverage to the members if someone did not availed the car loan facility, he can utilize the amount for availing home loan upto Rs 20 lakh.He also informed that the government has already increased the sitting fee from Rs 2000 to Rs 3000 per sitting.