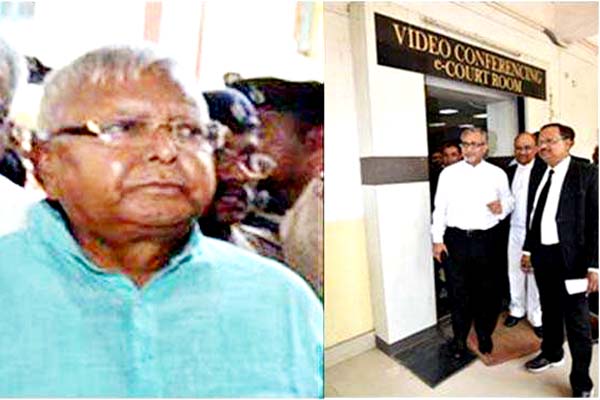 Ranchi, A special CBI court on Saturday awarded a total of 14 years' of imprisonment to former Bihar Chief Minister and RJD chief Lalu Prasad and also imposed a fine of Rs 60-lakh in the Fodder Scam. The special CBI judge Shivpal Singh awarded seven years of imprisonment and imposed a fine of Rs 30-lakh under sections 120 (B), 409, 420, 467,468, 471 and 477 (A) in case number RC38A/96 which is related to fraudulent withdrawal of Rs 3.76-crore from Dumka treasury of unified Bihar between 1991 to 1996. The CBI court also awarded seven-year imprisonment and a fine of Rs 30-lakh under PC Act sections 13 (2) read with 13(1)(c)(d). Both the punishments would run 'consecutively', the judge said in his judgement which means Lalu would have to undergo imprisonment of 14 years and he would have to pay a fine of Rs 60-lakh. Failing to pay the fine he would have to undergo additional imprisonment of two years. The court had on March 19 convicted a total of 19 accused in the case including Lalu while 12 others including former Bihar Chief Minister Dr Jaggananth Mishra were acquitted. The arguments on quantum of sentencing were made on March 21, 22, and 23 after which the court had fixed March 24 as the date for announcement of the sentencing. The CBI had filed a chargesheet against a total of 49 accused on May 11, 2000. Out of these 49, three became government witnesses and among them one has died. The higher court has quashed the charges against the then Dumka Commissioner S N Dubey in the case while 14 others died during the course of the trial.