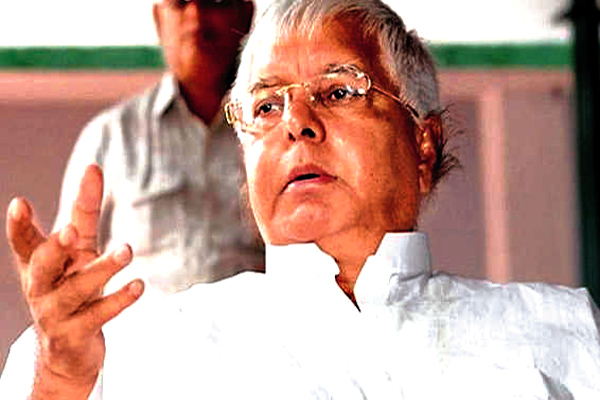 Agencies, Ranchi Former Bihar chief minister and RJD supremo Lalu Prasad Yadav today appeared before the special CBI courts here in connection with the multi crore fodder scam of the 1990s. Mr Yadav first appeared in the court of special CBI judge Shivpal Singh in connection with case number RC 38/96 which is related to fraudulent withdrawal of funds worth Rs 3.97 crore from the Dumka treasury. Mr Yadav later also appeared in the court of special CBI judge Pradeep Kumar in connection with case number RC47A/96 which is related to withdrawal of Rs 184 crore from the Doranda treasury. In this case, the CBI presented its witness income tax officer Ashok Kumar Pandey. On Monday again hearing in both the cases would be held. Later, when asked by reporters on his way back to the Hotwar Jail regarding the problems being faced in the jail, Mr Yadav asked the media persons to themselves visit the jail and see how the inmates live. “You should come to the jail and than you would get to see and feel,” he said adding that when the people of the press would come to the jail then they would actually realize what happens in the jail. Meanwhile, the Jharkhand High Court has put a stay on the notice issued to RJD leaders Tejaswi Yadav, Raghubans Prasad Singh and Shivanand Tiwari of the RJD and Manish Tiwari of the Congress who were issued a contempt of court notice by special CBI judge Shivpal Singh. Justice Singh had asked these four to be present in the court on January 23 for making statements against the judiciary.