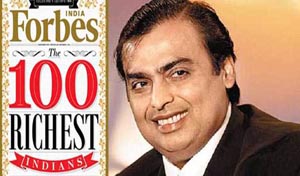 New Delhi, The richest Indian Mukesh Ambani has moved 19 ranks in the latest Forbes business magazine that produces an annual list of billionaires worldwide. The list released online on Tuesday revealed that India has 121 billionaires -- 19 more than last year -- making them the third largest group of the ultra-rich after those from the US and China. Energy and petrochemicals magnate Mr Ambani is richer by $16.9 billion in 2018 with assets of $40.1 billion. He moved up to the 19th global rank on the list of 2,208 billionaires worldwide compiled by Forbes. In 2017, he ranked 33rd with $23.2 billion. India has 121 billionaires in 2018, last year the figure was 102. The US has 585 billionaires and China 373 this year on the Forbes tally. However, diamond trader Nirav Modi, who has reportedly been linked to $1.8 billion scam involving Punjab National Bank, was out of the list of the billionaires club. He was ranked at the 85th position with assets worth $1.8 billion in the Indian billionaires list which was published by Forbes in October last year. Azim Premji, the software entrepreneur, moves to the second richest Indian spot in 2018, passing Lakshmi Mittal, the international steel tycoon, according to the magazine. Premji moved up from the 72nd global spot in 2017 with $14.9 billion, to the 58th rank with $18.8 billion this year. Although the value of his assets have increased over the past year, Lakshmi Mittal slid to the 62nd rank on the 2018 global list and to the third spot among Indians with $18.5 billion from the 56th worldwide rank with $16.4 billion in 2017. The richest Indian woman on the Forbes list is Savitri Jindal of the Jindal Steel and power conglomerate, who ranks 176th globally on the Forbes list with $8.8 billion.The list also includes the biotech entrepreneur Kiran Mazumdar-Shaw at 629 with $3.6 billion. Financial technology entrepreneur Vijay Shekhar Sharma (39), who ranks 1,394th globally with $1.7 billion, is the youngest Indian on the Forbes list. Software company HCL's founder Shiv Nadar is the fourth richest Indian on the list with $14.6 billion and is ranked 98 globally. Sun Pharmaceuticals founder Dilip Shanghvi ranks next as the fifth riches Indian with $12.8 billion at the 115th global spot. The Indian pharmaceutical sector has the most number of billionaires - 16. It is followed by consumer goods with 15 billionaires, real estate with nine, and software services and diversified investments with eight each. Meanwhile, Amazon founder Jeff Bezos is the world's richest man with assets valued at $112 billion, overtaking Microsoft co-founder Bill Gates whose fortunes are valued at $90 billion and investor Warren Buffet with $84 billion.