Four elephants run over by train in Jharkhand 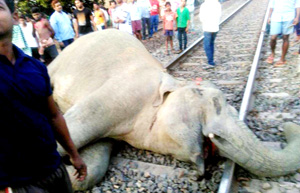 Ranchi, A group of four elephants were run over by a speeding train on the Chakardharpur-Jharsuguda rail section on the bordering areas of Jharkhand and Bihar. Forest officials today said the incident took place between Bagidih and Panpali railway stations late last night. The train traffic which was hit on the line was restored after the bodies of the tuskers was removed from the tracks. Forest officials said that between Bagidih-Panpali railway stations there is a very thick forest which is also a movement zone for the elephants. Last night as soon as a train passed on the track, a group of four elephants including two big and couple of baby elephants started running on the track due to which they were hit by the train and died on the spot.