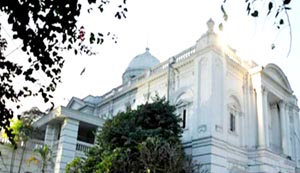 Dhaka, The International Crimes Tribunal (ICT) on Tuesday handed death sentence to four war criminals for committing crimes against humanity in Rajnagar of Moulvibazar district during the 1971 Liberation War. The four condemned convicts are Akmal Ali Talukdar, Abdur Nur Talukdar alias Lal Miah, Anis Miah and Abdul Mosabbir Miah. Of them, Akmal Ali is now in jail while the others remained absconding. The three-member tribunal, led by Justice Shahinur Islam, passed the order.Two allegations brought by prosecutions were proved against the criminals.They have been sentenced to death in one allegation and in another one, the ICT sentenced them to jail unto death. Earlier on Monday, the tribunal fixed Tuesday for delivering its judgment against four war criminals.On March 27, after concluding the hearing on the arguments from both sides, the tribunal kept the verdict pending. All of them were accused of committing genocide, murder, abduction and torture between May 7 to November 24 during the 1971 Liberation War carried out in Panchgaon and Paschimbhag villages in Rajnagarupazila. Earlier on May 7, 2017, the tribunal framed charges against them. On November 26, 2015, the ICT issued warrants for the arrest of four war crimes suspects. Police arrested Akmal Ali on that day from his village home.