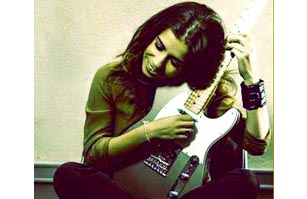 Chronicle Reporter, Bhopal French singer Hyleen will give a live performance at Bharat Bhavan on Friday at an event being organized under the international festival Bonjour India 2017-18. The event has been organised by Alliance Françoise de Bhopal in collaboration with the French Embassy in India, Gatecrash and Bharat Bhavan, Department of Culture, Government of Madhya Pradesh. Hyleen is a young guitarist, singer and songwriter hailing from Cannes in the South of France. Born in southern France in 1991, she has been gifted with a warm, powerful and husky voice that captures the heart of anyone who listens. Her music could be described as a unique fusion of Soul, Funk, Neo-soul, Pop with a touch of jazz and rich harmonies. Hyleen is a self-taught musician who started playing guitar at an early age in her brother’s band. When the latter left home to study full time, Hyleen decided to follow her own path and be her own artist: she found herself writing and composing her first songs. Later on, Hyleen studied musicology at university and then decided to attend the National Conservatory in Paris to broaden her musical horizons even further. For two years she honed her skills as a vocalist, guitarist and singer/songwriter. Whilst studying at the Conservatory, she started working on her solo project and debuted her new music to enthusiastic crowds across France.