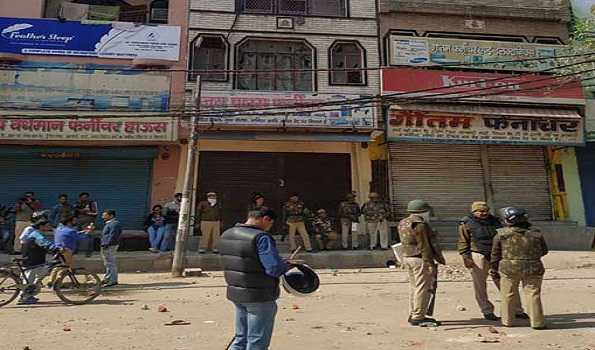 New Delhi,  Fresh incidents of stone-pelting were reported in North East Delhi’s Maujpur and Brahmpuri area here on Tuesday morning with the death toll from Monday’s violence rising to five.
A Police head constable was killed and a deputy commissioner of police injured among others as clashes over Citizenship Amendment Act (CAA) broke out in Jaffrabad and Maujpur in the national capital on Monday.

Groups of pro and anti-CAA protesters torched houses, shops and vehicles and hurled stones at each other in the Chand Bagh and Bhajanpura. Police fired tear gas shells and also resorted to lathi-charge to disperse the violent agitators.

According to police, Ratan Lal, a head constable of the ACP Gokalpuri, was killed. Several police personnel, including Deputy Commissioner of Police (DCP), Shahdara, Amit Sharma, were injured while trying to pacify the protests.

Section 144 of the CrPC, which prohibits assembly of four or more people, has been imposed in the affected areas.

There was heavy stone pelting in Maujpur, while police baton-charged to disperse protesters in Jaffrabad.

Shops and houses were vandalised and set on fire in Maujpur and Bhajanpura.