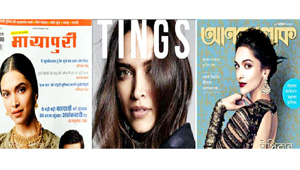 New Delhi, Deepika Padukone has been named in prestigious ‘TIME 100’ Influential list. The actress commands influence across the globe and is touted as a global icon. The actress made everyone proud by emerging as the only actress to feature in TIME's 100 influential list this year. While she was chosen amongst the top four people to raise a toast at TIMe gala, the actress also made it to the cover page of Tings London. Deepika's footprints are not only restricted to the broader spectrum of the business, but she also rules hearts in the grassroots as she has also turned cover girl for major national as well as international magazines.She looked simple yet stylish on the cover of Filmfare Middle East conquering the industry fearlessly and acing the game like a boss. The international icon also dazzled on the TINGS London cover recently adding yet another feather to her cap.Making an unmissable impact on the masses, Deepika Padukone's ‘Padmaavat’ has been ruling the audience as it becomes a hit amongst brides this wedding season. Beginning the year discovering more about herself, Deepika featured on Open magazine cover who decoded the career of the actress and also highlighted the remarkable journey of Deepika. The actress further turned up the heat on the cover of Femina magazine looking like a vision in black. The Vogue cover of Deepika showcased the happy side of the actress. Termed as the Queen of 100 crores club, Deepika Padukone holds the most number of seven-Rs 100 crores films, while her recent outing ‘Padmaavat’ clocking 300 crores at the box office. With this Deepika was titled the first actress to have entered the 300 crore club with a woman led film. Deepika commands the title of being of being the most commercially viable actress in the industry, in addition to being the highest paid actress. The Superstar, who has an incredible fan base not only in India but also the world is the most followed Asian woman on Twitter. With being proven as the most number of genuine followers on social media, Deepika Padukone is the reigning queen of Bollywood currently. Deepika Padukone has also brought about a social change as she became the first actress to publicly address the condition of mental illness and her suffering from depression. The actress currently has been working towards creating awareness and supporting mental illness with her NGO, The Live Love Laugh Foundation (TLLF). The actress also enjoys a huge fan following, a testimony of which is seen on her social media platforms with a follower base of more than 75 million.