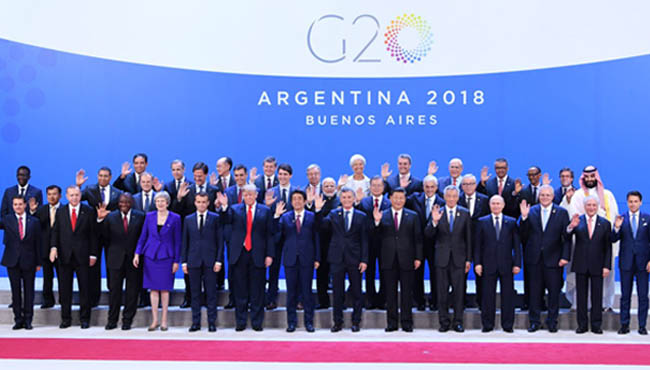 Agencies, Buenos Aires, The G20 summit concluded here on Saturday, with members endorsing the multilateral trading system, and calling for reforms to the World Trade Organization (WTO), the global trade oversight body. “The system is currently falling short of its objectives and there is room for improvement. We therefore support the necessary reform of the WTO to improve its functioning,” the final declaration said. “International trade and investment are important engines of growth, productivity, innovation, job creation and development. We recognize the contribution that the multilateral trading system has made to that end,” the members said. In terms of climate, the G20 leaders’ declaration said, “Signatories to the Paris Agreement... reaffirm that the Paris Agreement is irreversible and commit to its full implementation, reflecting common but differentiated responsibilities and respective capabilities...” “A strong economy and a healthy planet are mutually reinforcing… We recognize the importance of comprehensive adaptation strategies, including investment in infrastructure that is resilient to extreme weather events and disasters.” Argentine President Mauricio Macri summarized the declaration endorsed by all leaders at the G20 Summit and emphasized the support the international community is giving to Argentina. “We agreed that every one of us has to continue addressing their commitments giving strong support to renewable energies, a sector in which Argentina is betting heavily,” Mr Macri said. However, the communique adopted at a two-day G20 summit said that while other nations backed the pact, the US reiterated its decision to “withdraw” from the Paris Agreement. Brazilian President-elect Jair Bolsonaro has also said that he will not sign any climate agreement that will damage the country’s agribusiness sector. In the final declaration, the G20 leaders committed to the Hamburg Leaders Statement on Countering Terrorism.The global leaders also pledged to enhance their efforts to combat terrorism, proliferation financing and money laundering. They urged the digital industry to work together to fight exploitation of the internet and social media for terrorist purposes.The officials later said: “We reiterate that trade is beneficial for utility, innovation, growth and employment, and we reiterate that the multilateral trading system is the framework in which we are all working and committed”. They also said the wording on climate change was “a little bit more than the status quo but not backtracking” and the language around steel was kept to a minimum so leaders could reach an agreement.