Gold' is based on true events, not a biopic: Akshay Kumar 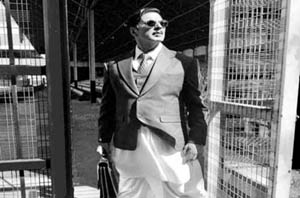 New Delhi, Akshay Kumar, who will be next seen as hockey coach Tapan Das in 'Gold', said the whole inspiration for the movie is taken from the true events, but it is not a biopic. 'There are some incidents which are true, some are fictional, but the whole inspiration is taken from true events. I would'nt call 'Gold' a biopic,' Akshay told UNI. When asked how he will describe 'Gold'--as a social or patriotic film, Akshay said, 'I saw the movie last night. It is a very commercial film. Even I would say patriotism is there, but when I was watching it, I actually thought I made a commercial movie.' 'Because while I was picturising about it, filming it, working on it, I thought it's a patriotic film, but I did not thought that with patriotism so much commercialism will come. I was quite shock when I saw the film. In last half an hour of the movie, I had goosebumps, after seeing the work my director Reema has done,' Akshay said. 'I would say this whole film belongs to these young guys--Kunal Kapoor, Amit Sadh, Vineet, Sunny Kaushal and my heroine (Mouni). These young boys have done amazing work. This whole movie belongs to them,' he said. On doing patriotic films, Akshay said,'I don't do something, because I have to prove that I am patriotic. I do because the stories are so beautiful.' Talking about Hockey as a national game, Akshay said,'I don't believe in making any game into natinal game. That means you segregate other games. Every game is important. We should win medals in all the sports. That's what I feel.I will be happiest if in coming Asian Games, Hockey wins gold' Talking about sports drama being in trend recently, Akshay said,'It's good, people are doing good business, things are changing.' On how does he gets into the skin of the character, Akshay said,'I am not those actors, who are locked in a room for a month and doing acting. For me I get to understand the role once, see if my clothes, and looks are fine, then I move forward. I have a simple approach and then I build a character.' Akshay also said he has always considered himself to be producer's actor first and that's the advice he gave to his co-star, Mouni Roy. "Once I had 16 flops but I still had four more films. Not because I was a director's actor but because I was a producer's actor. The producer is the one who invests money," Akshay said. "I believe in long-term thinking. I believe you have to be a producer's actor first, then the director's actor," he added. The sports drama is one of the most awaited films of the year.The film has been shot across the UK and India, capturing the fascinating aspects of the pre-independent era.'Gold' marks the Bollywood debut of actress Mouni Roy opposite Akshay Kumar. Starring Akshay Kumar, Mouni Roy, Kunal Kapoor, Amit Sadh, Vineet Singh and Sunny Kaushal, 'Gold' promises power packed performances by an ensemble cast.The film is set to hit the theatres on August 15.