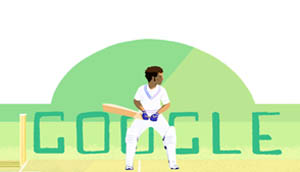 New Delhi, Google Doodle on Wednesday paid tribute to Dilip Sardesai on his 78th Birth Anniversary often regarded as the one of the best batsman against spin bowling.Sardesai was born on August 8, 1940, Margao in Goa. He made his Test debut against England at Kanpur in 1961 even before he played for Bombay, and it was against England, at Kanpur two years later, he scored 79 and, after India followed on, 87 to help save the game. Sardesai was the first Indian to score an Overseas Test double hundred 212 against West Indies, Kingston in 1971 and also went on to score a double hundred after 'following on' in a Test against New Zealand in Mumbai 1965.His last Test was against England at Delhi in 1972. In a career that spanned more than 10 years, Sardesai scored more than 10,000 First Class runs playing for the Mumbai Ranji team and India. Dilip Sardesai died on July 2, 2007, after he was admitted to Bombay Hospital on June 23 following a chest infection.