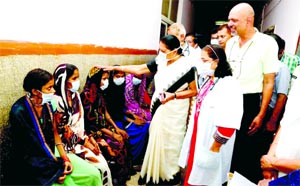 Chronicle Reporter, Bhopal The Governor Smt. Anandiben Patel has given instructions to conduct a campaign to make Bhopal, the capital of Madhya Pradesh, a T.B. free city first in the country on the call of the Prime Minister to make the country a T.B. free nation by 2022. Under this planned campaign, attention will be paid first on infants and women to make them free from this disease. Under the campaign, 25 infants suffering from T.B. will be explored and their parents will be informed about the treatment. Cooperation from the members of T.B. association and wealthy people will be taken to adopt at least one child. The Governor Smt. Patel was addressing the executive meeting of Madhya Pardesh T.B. association here today. She met female T.B. patients and gave fruits to them. Moreover, she advised patients to complete their treatment. This is the first occasion in the last 50 years, when any Governor went to meet the patients. The Governor Smt. Patel has urged all the citizens of Bhopal, MLAs, Former MLAs, Corporators, Former Corporators, Social and voluntary organisations to provide their every possible cooperation in this campaign. She said that we all Bhopalites should take part together in the war against T.B. There is no disease, which cannot be defeated with strong will power. She said that ghee, oil and fruits are needed for consumption by female T.B. patients and infants suffering from the disease. Hence, all the people of the society have responsibility to send these items to the patients and pay attention to ensure its consumption by the patients. The Governor mentioned that there are several prominent social activists, who want to cooperate in such a noble work like this T.B. free campaign, but they are not informed about this and nobody contact them in this connection. She has entrusted the responsibility to make this campaign successful to Dr. Manoj Verma of the T.B. hospital. Furthermore, the Governor said that several schemes are being implemented by the union and state government for women and child health. We will not yield good result from these schemes till we do not get cooperation from all the people of the society. Chairman of Madhya Pradesh T.B. Association Smt. Manjula Pandaya delivered a welcome speech. Secretary Dr. G.P. Saxena informed about the activities of the association.