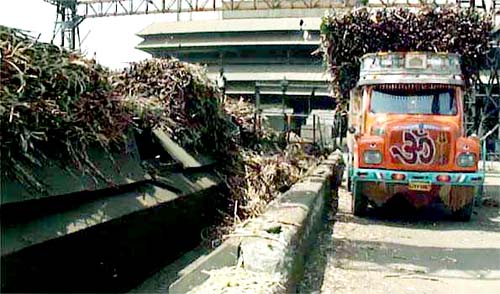 New Delhi, The Cabinet Committee on Economic Affairs on Wednesday gave its approval to revise or fix the price of ethanol derived from B heavy molasses or partial sugarcane juice and fix a higher price for 100 per cent sugarcane juice based ethanol for the forthcoming sugar season 2018-19. Briefing reporters, Union Petroleum Minister Dharmendra Pradhan said the CCEA chaired by Prime Minister Narendra Modi decided that there fixed rate for the 'ex-mill price of ethanol derived out of B heavy molasses or partial sugarcane juice to Rs 52.43 per litre". This is change from the prevailing price of Rs 47.13 per litre.There will be incentives for those mills who will divert 100 sugarcane juice for production of ethanol thereby not producing any sugar. Additionally, GST and transportation charges will also be payable. The sugar industry has lately witnessed a crash in sugar price due to over-production. "The production of sugar must be according to needs," Mr Pradhan said. Oil Manufacturing Companies have been advised to fix realistic transportation charges so that long distance transportation of ethanol is not disincentivised. The decision will serve multiple purposes of reducing excess sugar in the country, increasing liquidity with the sugar mills for settling cane farmer's dues and making higher ethanol available for Ethanol Blended Petrol (EBP) Programme. "All distilleries will be able to take benefit of the scheme and large number of them are expected to supply ethanol for the EBP programme," an official statement said. Another impact of the move will be that the remunerative price to ethanol suppliers will help in reduction of cane farmer's arrears, in the process contributing to minimizing difficulty of sugarcane farmers. Increased ethanol blending in petrol has many benefits including reduction in import dependency, support to agricultural sector, more environmental friendly fuel, lesser pollution and additional income to farmers, the source said. The Ethanol Blended Petrol Programme was launched by the Government in 2003 on pilot basis which has been subsequently extended to the Notified 21 states and 4 Union Territories to promote the use of alternative and environment friendly fuels. Sources further pointed out that the government has notified administered price of, ethanol since 2014.