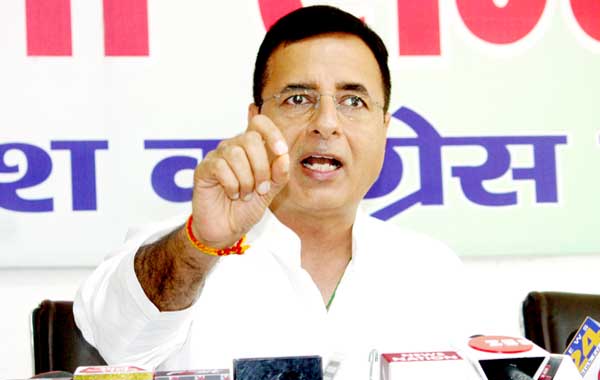 New Delhi, Terming as 'blatantly false' the claims by the Narendra Modi Government that cost of the Rafale fighter jets in the deal signed by them is higher on account on additional technical specifications, the Congress on Saturday said that the Rafale aircraft being purchased by the UPA Government and now by the NDA Government, including ‘its associated systems and weapons’, are the same as tested and approved by Indian Air Force during the previous Government. In a statement issued here, AICC media incharge Randeep Surjewala said,'Claim of Modi Government that cost is increased on account on additional technical specifications is blatantly false. In fact, the Rafale aircraft being purchased earlier (UPA-Congress Govt) and now (Modi Govt) including ‘its associated systems and weapons’ are the same as tested and approved by Indian Air Force during the UPA Government. This is proved by a Joint Statement dated 10th April, 2015 issued by French President Francois Hollande and Prime Minister, Narendra Modi which reads “…that the aircraft and associated systems and weapons would be delivered on the same configuration as has been tested and approved by Indian Air Force…” Mr Surjewala said that information in public domain has affirmed that according to the ‘Air Staff Qualitative Requirements’ (ASQR) provided by the Indian Air Force (IAF) there were 13 ‘India specific enhancements' demanded by India during the 126 aircrafts MMRCA Contract issued by Congress-UPA Government. These included Radar Enhancement, Helmet Mounted Display, Towed decoy system, Low band jammer, Radio altimeter and Ability to start and operate from High Altitude Airfields. He said that the deal signed by the NDA did not include the clause for transfer of technology in the deal signed by the UPA. 'Combat Aircraft tender issued by Congress Government clearly envisaged ‘full weaponry’ and ‘Transfer of Technology’, which is missing in the BJP Government’s deal. RFP issued by Congress Government clearly states “cost of initial purchase, transfer of technology, licensed production, etc.” Is BJP trying to say that Indian Air Force and the then Congress Govt were buying Medium Multi-Role Combat Aircraft (MMRCA) for ‘joyrides’ instead it being a combat aircraft for defending our country?,' Mr Surjewala said. He charged the Modi Government of causing a massive Loss of Rs 41,000 Cr to Public Exchequer by purchasing the 36 Rafale aircrafts with the same configuration at thrice the price. He also blamed the government for delaying the purchase of Rafale aircrafts to Indian Air Force by signing a fresh deal with same ‘India Specific Enhancements’ as decided during Congress-UPA, minus the all important ‘Transfer of Technology’ and Award of Rs 30,000 Cr ‘Offset Contract’ to HAL. 'The NDA Government compromised the ‘National Security’ by unilaterally purchasing only 36 aircrafts instead of 126 without consulting the Indian Air Force and squandered away ‘National Interests’ by forgoing the ‘Transfer of Technology’ to our Public Sector Undertaking, Hindustan Aeronautics Ltd. (HAL),' Mr Surjewala said.