Govt did and will do everything that farmers never expected 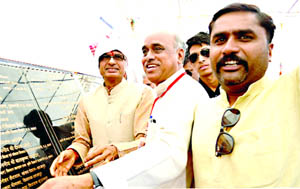 Chronicle Reporter, Bhopal Chief Minister Shivraj Singh Chouhan has said that Chief Minister Krishak Samriddhi Yojana has been implemented to give the farmers the full cost of their sweat. In this, Rs. 265 per quintal will be given to the farmers on sale of wheat on support price or more, Rs 100 per quintal on sale of gram, lentil mustard and Rs 800 per quintal sale of garlic. Chouhan was addressing the Kisan Mahasammelan today in Shajapur. In the programme, Rs 1,669 crore was deposited online in the bank accounts of 10 lakh 21 thousand farmers. This amount was given at the rate of Rs 200 per quintal for wheat procurement year 2016-17 and paddy acquisition year 2017.

Farmers should be aware of conspiracy

Chief Minister Chouhan said that farmers will be encouraged for the diversification of food processing and agriculture to fetch fair price to the farmers for their produce. This year itself state level organisation will be constituted for the export of agricultural produce. He said that farmers have the right over the resources of the country. Farmers’ problems must not be politicized. They must be careful not to fall prey to conspiracies. He said that today a shortage of cash is being created in the state which the state government will tackle. If farmers have any difficulty, they can call on the phone numbers 0755-2540500 atthe control room set up at CM House. Chouhan said that they should extend support to the state government in promoting cultivation to develop the state. The Chief Minister reiterated his resolution to make the state lead among developed states.

Case to be settled only on getting free copy of Khasra

CM Chouhan said that the Mukhya Mantri Yuva Krishak Udyami Yojana has been started in which loan up to Rs 2 crore will be made available to the children of farmers to set up industries. State government will take the guarantee of this loan. He told that this year 100 youths will be provided loans from each block. He said that 14 lakh cases of mutation and property distribution have been settled in three months in a special campaign run for the settlement of revenue cases. Now the concerned farmer will be given free copies of khasra and map after the order of mutation. Only then will the case be considered settled. The Chief Minister said that if the farmer brings the transformer for replacement, the power company will give the fare. If after replacement, the transformer gets burnt within three months, it will be replaced again without charging the remaining amount. Chief Minister Chouhan said that farmers with land up to 2.5 acres have been included in the chief Minister’s Unorganized Labourers Welfare Scheme. A new scheme has been set up for defaulter farmers, in which interest will be paid by the state government and half of the principal amount is given by the farmer he will be given loan on zero percent interest. Chouhan said that this year, an amount of Rs. 2 thousand crore has been deposited in the account of farmers in the payment scheme.

Government doing the unexpected for farmers

CM Chouhan said that no stone will be left unturned in providing facilities to the farmers. the government is doing the unexpected for the farmers. He reminded the public that during the previous government, farmers got loans at 18 percent interest, which has been reduced to zero percent. Interest on advance storage of manure is given by the state government. The relief amount given in natural calamity was Rs 2.50 per hectare, which has been increased to Rs 30 thousand per hectare. In one year farmers have been given Rs 18 thousand crore as relief. When the interest rate fell, the state government had purchased onion at Rs 800 per quintal for which Rs 650 crore was spent. Irrigation capacity has been increased from 7.5 lakh hectare to 40 lakh hectare in the state. Adequate power arrangement has been made for irrigation. State government is making every possible effort to make farming a beneficial profession.