Govt does not want Muslim women to get justice: Cong 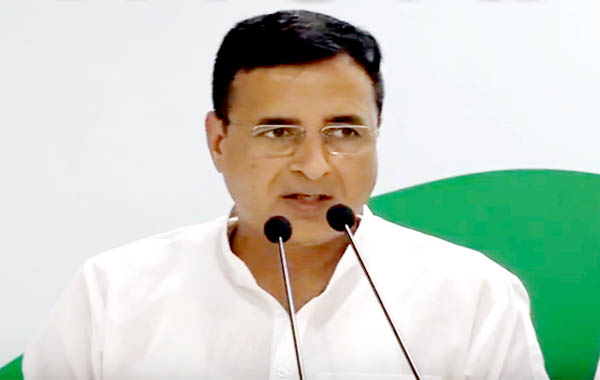 New Delhi, Reacting to the decision of the Union Cabinet approving an ordinance providing punishment for Triple Talaq, the Congress on Wednesday accused the government of using it as a ‘political tool’ and said that the BJP was not really interested in providing justice to Muslim women. Talking to reporters here, AICC media in charge Randeep Surjewala , reacting to the Union Cabinet’s approval to the Ordinance making Triple Talaq a punishable offence, alleged that the Government had failed to respond to the suggestions by the Congress to ensure that Muslim women victims of Triple Talaq would be able to get a right to their husband's property. 'For us, Triple Talaq has always been a humanitarian issue, a matter related to women's rights and justice for women. Therefore, the Congress leaders like Manish Tewari and Salman Khurshid advocated in the Supreme Court for victims of Triple Talaq. 'Today, when the Triple Talaq has been banned, the next step is to secure justice for Muslim women and to ensure that they get the right of allowance from husband's property to help them raise their children and their family and if the husband is not able to provide this, his property be attached. 'However, the Modi Government is dilly-dallying on the issue. They do not want that Muslim women to get justice. PM Modi does not want that Muslim women should get allowance from their husband’s income. Hence, we had given some amendments in the Tripl;e Talaq Bill that the property of the husband of the victim be confiscated or attached so that the Muslim woman who is a victim of Triple talaq is able to run her family and look after her children in case her husband goes to jail. But the Modi government wants to use the issue as a to political football rather than viewing it as a issue of justice for Muslim women,’’ Mr Surjewala said. The Union Cabinet on Wednesday passed the Ordinance making Triple Talaq a punishable offence and the Law Minister Ravi Shankar Prasad said the executive order route has been taken due to "constitutional urgency". "My special appeal to Sonia Gandhi....to appreciate that this Bill is pro-women. Similarly, my appeal is to Mayawati (chief of BSP) and also Mamata Banerjee (of Trinamool)," Mr Prasad told reporters here. Accusing the Congress of not allowing passage of the Bill in the Rajya Sabha,Mr Prasad said, 'We tried to take Congress along while piloting this Bill....Myself and Parliamentary Affairs Minister Ananth Kumar tried meeting and taking views of Congress leader Ghulam Nabi Azad five times.’’ He lamented that despite being led by a woman like Sonia Gandhi - the Congress party did not back government initiatives to crush such a "damankari (atrocious)" system against women.