Govt endeavouring to ensure affordable healthcare to every citizen: PM 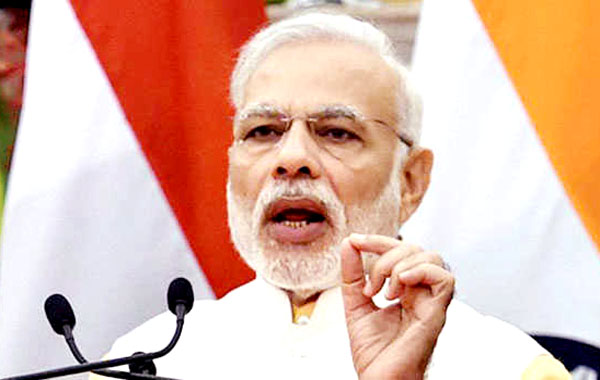 New Delhi, Terming the Pradhan Mantri Bhartiya Janaushadhi Pariyojna, a scheme aimed at ensuring that poor, lower middle class and middle class get access to affordable medicines, Prime Minister Narendra Modi on Thursday said that the government is endeavouring to ensure affordable healthcare to every citizen. Interacting with the beneficiaries of Pradhan Mantri Bhartiya Janaushadhi Pariyojna and other Central Government healthcare schemes from across the country, through video bridge, Mr Modi said, ‘Pradhan Mantri Bhartiya Janaushadhi Pariyojna was launched so that poor, lower middle class and middle class get access to affordable medicines and their financial burden is reduced.’ The Government has opened more than 3,600 Jan Aushadhi Kendras all over the country, where more than 700 generic medicines are available at affordable price. The cost of medicines at Jan Aushadhi Kendras are 50-90 per cent less than the market price, the Prime Minister said and added that the number of Jan Aushadhi Kendras will reach over 5,000 in the near future.’ Talking about heart stents, the PM said that earlier citizens had to sell or mortgage property to purchase heart stents. He added that, the government has reduced the prices of stents substantially to help poor and middle class. The cost of heart stents have reduced from around Rs. 2 lakh to Rs 29,000. During the interaction, Mr Modi said that the Government has reduced knee transplant prices by 60 - 70 per cent, thereby bringing down the cost from Rs 2.5 lakh to around Rs 70, 000 – 80,000. ‘It is estimated that around 1 to 1.5 lakh knee operations happen in India every year. On that account, the reduction in knee transplant prices has saved close to Rs 1,500 crore for public,’ he said. ‘Through Pradhan Mantri Rashtriya Dialysis Program, Government has performed more than 22 lakh dialysis sessions for 2.25 lakh patients in more than 500 districts. More than 3.15 crore children and 80 lakh pregnant women have been vaccinated in 528 districts through Mission Indradhanush,’ the Prime Minister said. The PM said that in order to ensure more beds, more hospitals and more doctors, Government has opened 92 medical colleges and increased MBBS seats by 15000. Prime Minister said that to make healthcare affordable and accessible, Government launched the Ayushman Bharat scheme.Under Ayushman Bharat, 10 crore families will be covered with health insurance of Rs. 5 lakh, the PM said. Talking about ‘Swachh Bharat Mission’, the Prime Minister said,’’the scheme is playing a central role in creating a healthy India. Due to the Swachh Bharat Abhiyan, there are now 3.5 lakh open defecation free villages in India and the sanitation coverage has increased by 38 per cent.’’ Interacting with the Prime Minister, beneficiaries explained how Pradhan Mantri Bhartiya Janaushadhi Pariyojna brought down the cost of the medicines and made it affordable.Beneficiaries also talked about how reduced prices of heart stent and knee transplants have changed their life. Prime Minister also appealed to the public to take up Yoga, make it part of life style and thereby help in building a healthy nation.