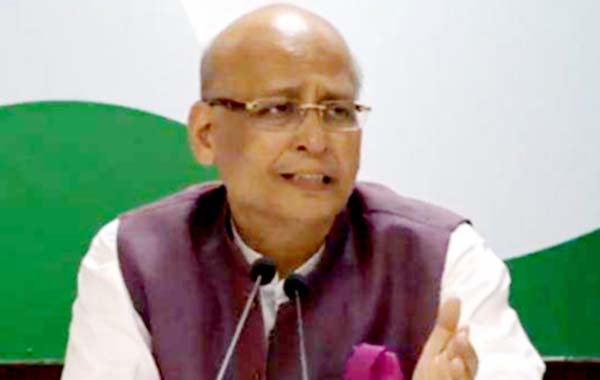 New Delhi, Accusing the Narendra Modi government of following different standards for granting of offset contracts for Rafale deal and the deal for AK rifle with Russia, the Congress on Wednesday said a fallacious argument of the government on the Rafale Scam have been nipped in the bud by its own negotiations in the Defence deal with Russia. Talking to reporters here, AICC Spokesperson Abhishek Manu Singhvi said, 'When asked why Reliance Defence was granted the offset contrat in the Rafale deal, the government said the Rafale deal was a Government to Government agreement and it (Modi Govt) had absolutely no role in facilitating the Rs 30,000 Cr Offset Contract + Rs 1, 00,000 Cr 'Life Cycle Contract' to a private entity, which had zero experience in manufacturing aircraft. However, according to several media reports, it has been revealed that Defence Minister Nirmala Sitharaman has reportedly turned down a Russian request to make another private Indian entity its partner for the joint manufacture of Rs 3,000-crore worth of AK-103 assault rifles for the Indian Army. The government has reportedly advised Russia that its firm Kalashnikov Concern should tie up with the state-run Ordnance Factory Board (OFB), if it wants its proposal to manufacture the AK-103 assault rifles in India, to be considered by the Defence Ministry. This shows the government's 'double speak' on the Rafale deal and the AK rifle deal.' Mr Singhvi said it has been revealed that the Defence Ministry reportedly shot down Kalashnikov Concern's proposal for a joint venture with the private Indian entity, which has recently entered the Defence sector, to produce the 7.62x39 mm calibre AK-103 gun, which is a derivative of the iconic AK-47 rifle. Posing questions to the Modi Government on the issue, Mr Singhvi said, 'Why did it not apply the same principle in the Rafale Scam? Why did the Modi government not advise Dassault Aviation to negotiate further with the government-run HAL? Especially when the Foreign Secretary, in his customary briefing before PM Modi's France trip, (on April 8, 2015) said categorically 'in terms of Rafale, my understanding is, discussions were underway between the French Company, our Ministry of Defence, the HAL which is involved in this. 'There are ongoing discussions. These are very technical, detailed discussions…This was just 48 hours before PM Modi signed a unilateral contract for 36 Rafale aircraft in Paris, France on April 10, 2015.' Referring to the reports, which said that MoD last month also said that if the Russians want to partner with a private Indian entity, they must come through the 'tender route,' Mr Singhvi asked, 'Why was this same principle not applied then, during the Rafale Scam? 'Is the Modi Govt lying in the AK-rifle deal or in the Rafale deal? Hasn't its 'source based'- 'headlines management' backfired now? Since Modi Govt has virtually given up 'Make in India' in Defence, by only getting an investment of Rs one crore till now, it is imperative for them to clear the air on the same. The Nation is waiting for a clear answer on this Doublespeak.'