Govt is committed to provide fair price to farmers 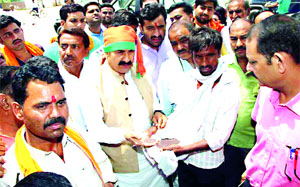 Chronicle Reporter, Bhopal Minister for Public Relations, Water Resources and Parliamentary Affairs Dr. Narottam Mishra visited Datia Krishi Upaj Mandi and held discussions with the farmers after conducting an inspection of weighing scales. He said that the state government is committed to provide fair price to all the farmers for their produce. Dr. Mishra gave instructions that proper arrangement of shady place and drinking water should be made for the farmers. He further said that all the problems of the farmers will be solved. He stated that not a single complaint from the farmers should be received by him. Strict action will be taken on receipt of complaints. Several public representatives were present on the occasion. Before this, Minister Dr. Mishra met many public representatives and workers during his visit to Datia today and obtained information regarding preparations of Anushthan to be held in Sharvan. It may be mentioned that the Yagya was held with public participation in Datia earlier also. The Parthiv Sivling Nirman Yagya Anushthan will start from Kalash Yatra on August 13.

Minister Dr. Mishra will meet common man at his Datia residential office after performing pooja in Maa Pitambara Peeth and Shani Mandir in Datia on April 28. After taking part in Jan-Samvad programme, he will dedicate building of Chak Ramsagar Middle school.