Govt, Oppn gear up for Monsoon session of Parliament 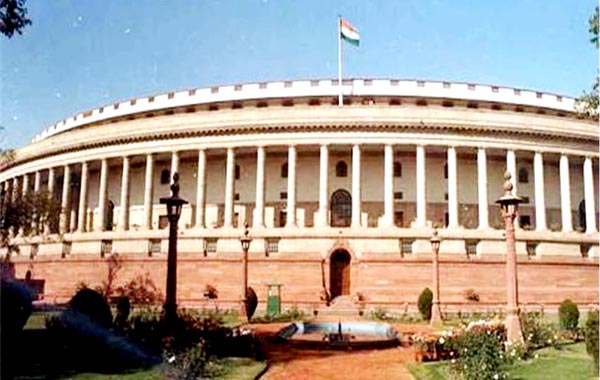 New Delhi, The Monsoon Session of Parliament gets underway on Wednesday.Both sides - the Government and the Opposition - seemed to have geared up for what is expected to be a stormy session. A series of meetings were held on Tuesday in order to maintain calm and tranquility so that the smooth conduct of the businesses are ensured in both the Houses.The session with 18 working days will continue till August 10. Six bills replacing ordinances promulgated in the inter-session period would be high on government's agenda. The presiding officers M Venkaiah Naidu in Rajya Sabha and Lok Sabha Speaker Sumitra Mahajan met party leaders separately and sought cooperation. At an all party meet, Prime Minister Narendra Modi appealed to the Opposition for a debate on all important issues and said:“If there is discussion in Parliament,the government will gain wisdom and will be in a position to reconsider some policies". However, shortly after Prime Minister's appeal, the opposition leaders cited a range of contentious issues, including mob lynching and political developments in Jammu and Kashmir which they would raised to corner the government. Samajwadi Party's Ram Gopal Yadav said that his party "will not allow the House to function" if there is no categorical assurance from government on withdrawal of an order on SC/ST appointments in higher education. Congress floor leader in Lok Sabha Mallikarjun Kharge said his party is working with other opposition parties, including TDP, to bring a notice of no-confidence against the government. Lok Sabha Speaker Sumitra Mahajan hosted a dinner for all party MPs on Tuesday evening. Members from different parties including Mallikarjun Kharge and Jyotiraditya Scindia (both Congress), CPI-M MP Mohammad Salim, SP's Dharmendra Yadav, NCP's Tariq Anwar, RJD's Jay Prakash Narayan Yadav, AAP's Bhagwant Mann, IUML's PK Kunhalikutty, and CPI's CN Jayadevan have written a letter to Speaker Ms Mahajan and alleged that the government is not allowing to let the House smoothly. The Speaker had written a letter to Members last week urging them to discharge their duties more responsibly. Meanwhile, the government has listed a substantive legislative business for the session. This includes 48 items, including 46 Bills and two financial matters. The draft laws like The Muslim Women (Protection of Rights on Marriage) Bill- commonly known as anti-instant Triple Talaq bill and The Constitution (123rd Amendment) Bill, that gives Constitutional status to the National Commission for Backward Classes will get top priority from the treasury bench. Other Bills likely to come up are - The National Medical Commission Bill, The Motor Vehicles (Amendment) Bill, The Prevention of Corruption (Amendment) Bill, The Consumer Protection Bill, The Dam Safety Bill and Trafficking of Persons (Prevention, Protection and Rehabilitation) Bill.